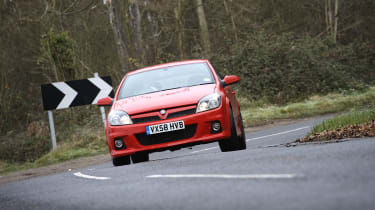 The secret of great comedy is timing, so it should come as no surprise that the arrival of Triple Eight Engineering’s Astra VXR at the evo office in the first week of December raised a laugh or two. Transmitting 295bhp and 317lb ft of torque through tyres also burdened with steering loads is surely a big ask even on dry, high-grip asphalt, never mind when the roads are covered with a gloopy mix of rotting leaves, grit and patches of ice. However, when it’s you who has been handed the key (or rather the plastic keyless-entry blob) on just such a day, the gag loses its humour faster than a Russell Brand radio show.

Despite the foreboding snow-laden black clouds overhead, the bright red Triple Eight Astra cuts a striking profile in the car park. It’s sitting on black 18in VX Racing alloys that are very similar to those found on Fabrizio Giovanardi’s title-winning Touring Car, which itself is engineered by the very same crew behind this road car. Wrapped in the Toyo Proxes T1-Rs favoured by aftermarket tuners, the new wheels snugly fill the arches thanks to lower springs, and neatly envelop the uprated 343mm ventilated AP Racing discs and blue four-pot calipers.

Stab the starter button and the turbocharged 2-litre motor blares into life with a far deeper, louder, bassier boom than the regular VXR. That’ll be the Remus sports exhaust, which costs £850 and single-handedly adds almost 20bhp to the standard car’s 237bhp total. The rest of the added shove comes courtesy of a £550 software upgrade that can be accessed via the Sport button (which also stiffens the suspension and sharpens the throttle response). Thumb it and there’s an immediate surge as the computer wizardry does its thing and fires Vauxhall’s hottest hatch up the road with startling pace, and the occasional wiggle through the helm as the scrap for supremacy between torque and Toyo begins. Change up and, as you snick through the narrow gate, the exhaust marks the moment with a loud pop. It’s all very BTCC.

So is the ride. It’s now very stiff, but the standard dampers make a remarkably good fist of keeping up with the workload now demanded of them. Straights are a real blast, but you’ll soon find one of those horrible slippery corners heading your way. Stomp on the £1600 uprated anchors and speed is dissipated effectively, then you gently, almost nervously tip the Astra into your first turn. What happens next comes as quite a surprise: the nose grips, turns in and, as long as you’re not overly greedy or hurried with the throttle, you can squeeze the power on.

With so much grunt at your disposal you can, of course, make it look hamfisted, but the traction control system does a brilliantly subtle job of helping out with the reins. (It can be deactivated by holding the Sport button down, but really there’s no point.) No, the 888 doesn’t have the deeply impressive deployment skills of Renault’s class-leading R26 Mégane, but it remains on the right side of the line that divides fun from terror and control from chaos. The steering could help by providing a little more feel and feedback, as the more power you have available to break traction, the more you crave the detail of where that grip boundary lies, but to be fair to Vauxhall that is a criticism that can be levelled at most current hatches. You just have to adjust to it.

As we’ve come to expect with Triple Eight’s packages, this one can be retro-fitted to any Astra VXR at the VXR Performance Centre in Banbury, and you can pick and chose which parts you want depending on your budget and preferences. If it were us, we’d take the lot.