The evolution of the Corsa VXR

From Nova onwards, how the VXR came to be 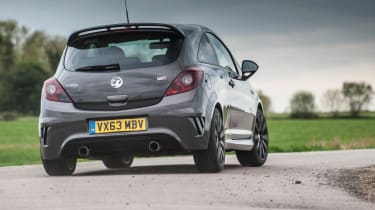 With evo driving the new Corsa VXR earlier this week, we thought it only fitting to take you through the evolution of the car up until today.

The idea of a Vauxhall branded hot hatch is one that stretches all the way back to 1982 with the likes of the Nova. Only recently has the VXR badge come to fruition, but its roots can be traced back much further. Read on to find out how. 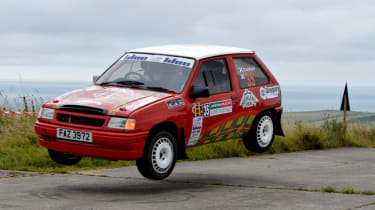 The first-generation Corsa was sold as the Nova in Britain, and spawned several performance variants during its eleven-year production. Of particular note was the Irmscher-tuned GTE model, which featured a 1.6-litre four cylinder engine producing 97bhp in the power-sapping catalysed version. Facelifted models were known as the Grand Sport Injection. A popular modification for these cars was to bolt in the 2.0-litre turbocharged motor from the Calibra coupe, giving the box-arched hatchback 200bhp capability.

Nova enthusiasts hold the rarefied Nova Sport in high regard. Built to homologate Vauxhall’s rally competitor for Group A, all Nova Sports were finished in white and sported two Weber 40 DCOE carburettors to reduce the 0-60mph time to just under 9 seconds. The option of period red, yellow and grey stickers gave the Nova an extra dose of visual attitude. 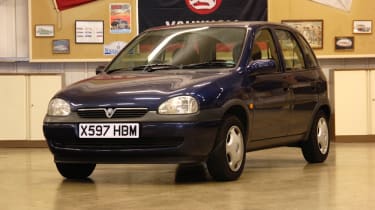 The curvier Corsa B hit the British market in the early-90s, and with it the pages of Max Power magazine. Easily modified, the B-generation model has been turned into everything from a rally stage special, a scissor-doored show car or a dragster thanks to its low kerb weight and the easy availability of spare parts. Both the 1.4 and 1.6-litre Sports are the fastest B models, offering either 88bhp or 104bhp in standard form.

Vauxhall continued the Corsa in 2000 with the C-generation chassis. The top model in the range was the 1.8-litre SRi, which could go on to 126mph. No VXR variant was released, despite the formation of the tuning arm towards the end of this model’s production life in 2004. 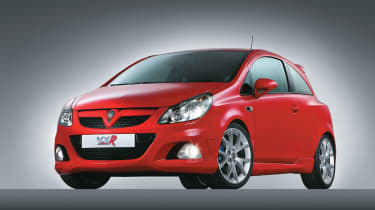 Vauxhall’s first-ever Corsa VXR arrived in 2007 with a 1.6-litre turbocharged four cylinder producing 189bhp and 192lb ft. It sported a boot spoiler, rear diffuser and faux triangular centre-exit exhaust to match the potential under the bonnet. We group-tested it in issue 154 and loved the deep-sided, torso-hugging Recaros and the short gearing which made the most of the turbo’s punchy delivery. Getting the power down was an issue, though, and distracted steering often robbed of feel made it harder to exploit the engine fully.

Vauxhall attempted to address the VXR’s nervousness over bumpy B-roads in 2011 by releasing the Nürburgring Edition, which saw total output boosted to 202bhp and 206lb ft and controlled with a mechanical multi-plate limited-slip differential. Chassis upgrades included Bilstein springs and dampers and Brembo brakes front and rear. A further refinement was the Clubsport Edition released in 2014 as a run-out version of the VXR, which added a Remus sports exhaust to the package. Still great fun to drive thanks to its raw, boosted power delivery, the VXR’s interior was disappointing by the time it went out of production and at nearly £23,000 when we tested it, the Clubsport was expensive compared to rival offerings. 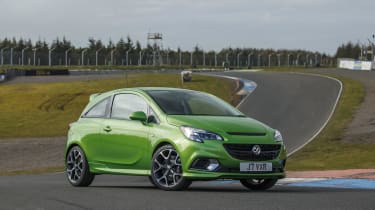 In a tactical move, Vauxhall has announced pricing for the second-generation Corsa VXR that will undercut its closest rivals. With the range beginning at £17,995 it will undercut the Volkswagen Polo GTI, Ford Fiesta ST and Renaultsport Clio when it arrives in showrooms this May.

The new VXR will dismiss the 0-60mph run in 6.5 seconds and power on to a top speed of 143mph. In a move away from previous suspension component supplier Bilstein, Frequency Selective Damping allows the Koni dampers to soak up low-speed roughness while containing body roll at speed. Retuned suspension settings have also resulted in a ride height drop of 10mm

Customers will also have the £2,400 option of fitting a manufacturer-approved Performance Pack, which brings a Drexler limited-slip differential, Brembo four-piston brakes and 18-inch wheels clothed in Michelin Pilot Super Sport tyres. A five-second overboost function will provide an additional 26lb ft of torque between 1900 and 5800rpm, increasing the VXR’s responsiveness in real-world overtaking situations.

With the previous model’s reputation as a bit of a hooligan, what are our first impressions from behind the wheel? You can read our thoughts from the launch drive here.