The first impression is of a much-improved cabin, despite those few carried over items of switchgear. The infotainment system now feels modern and up to date, whereas the previous version’s was from a forgotten age. That being said, many of the dash and door card plastics are still very scratchy, so the Peugeot 208 GTi and Mini Cooper S are more cosseting.

Inside, the Corsa VXR gets Recaro shell-backed cloth sports seats, with side bolsters trimmed in Morrocana (essentially a synthetic leather). Ahead of this sits a three-spoke flat-bottomed steering wheel wrapped in leather and an instrument display cluster with VXR logos. 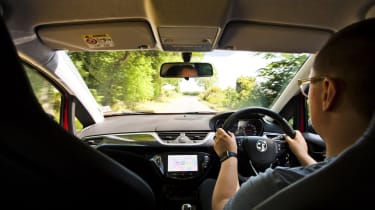 As standard the VXR comes with a heated front windscreen, an IntelliLink infotainment system - that integrates media controls and connects to iOS and Android smartphones – aircon and cruise control.

It doesn't include a sat-nav, requiring you to download the 'BringGo' app in order to relay nav info from your smartphone to the car's screen. It's not the best system and falls short of the VW group setup. Other apps which can be relayed include TuneIn radio which lets you send internet radio to your nav. It's not hugely necessary as the DAB system in the VXR is actually fairly impressive.