The 1.6-litre, four-cylinder turbo engine and six-speed manual gearbox are carried over from the previous Corsa VXR, albeit with significant revisions to both. The intake system, clutch and flywheel, fuel injector, intercooler, ECU and exhaust are either new or heavily revised.

The six-speed manual gearbox uses new selector forks and a revised linkage to improve the shift quality, which was a major weakness of the previous model. 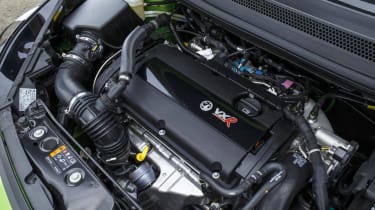 The issue came from the last-gen's ability to snag second gear from first, or fourth when shifting down from fifth. It's better in the new VXR, with a cleaner, slicker and smoother shift. It's not the kind of shift that will have you changing up and down through the 'box just for the joy of it, but it's accurate enough that shifting is no longer a chore when you're on a charge. Pedal placement is just about suitable to enact heel-and-toe gearchanges.

Fundamentally however the box is still almost the same, putting it behind the Ford Fiesta ST's wonderfully precise and mechanical throw. It also can't match the Ford for ergonomics.