Power is 202bhp at 5800rpm – an improvement of 10bhp over the original Corsa VXR, but no more than the limited edition Clubsport version. Peak torque is 207lb ft between 1900 and 5800rpm on five-second overboost.

In the new car the engine has an appreciably broader torque curve and it pulls very hard from the mid-range, although there are no top end fireworks worth pursuing. There's a vaguely sporty sonic backdrop when you extend the engine but it's otherwise fairly smooth and quiet, which makes it surprisingly liveable over long distances - there's no boom to contend with in the cabin. 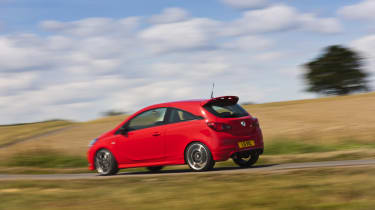 Vauxhall claims 0-60mph in 6.5 seconds (with 0-62mph in 6.8sec) and 143mph flat out. This is strong, especially considering Peugeot’s extra-hot 205bhp 208 GTi 30th Anniversary can only produce the same numbers. It's a touch quicker than a Fiesta ST on paper, too.

Those who opt for a Performance Pack equipped VXR will find added benefit from the Drexler limited slip differential as it does an especially good job of helping the car put its power down, albeit in a fairly aggressive manner compared to some other cars so-equipped in this class.