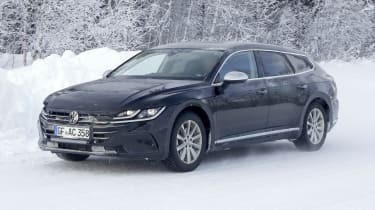 The Volkswagen Arteon has been spotted testing with a svelte new shooting brake bodystyle. Due to join the hatchback alongside a range-wide mid-cycle update later this year, this is the first time Volkswagen has offered a second body option for its style-led Passat variant.

As seen in these images, the new estate body will maintain the standard Arteon’s aggressive nose, but replace the sloping hatchback roofline with a boxier estate section. It’s still very sleek though, and combined with an extreme rake to the rear screen and those bulked out rear arches, keeps this estate looking lower, leaner and more dynamic than the rather more boxy Passat estate. 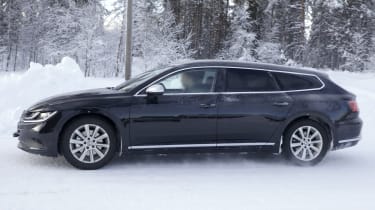 Look closely at the nose and you’ll see a subtly redesigned bumper, but the current Arteon’s hidden headlight aesthetic will remain, mimicking the Touareg in the upper reaches of Volkswagen’s model range.

The standard Arteon’s Golf-derived underpinnings remain too, so we expect the current suite of four-cylinder turbocharged petrol and diesel engines to be available, although Volkswagen’s recent push into electrified plug-in hybrid powertrains in its model range will likely be seen here too. 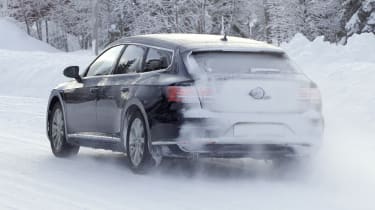 With a need to keep VW’s CO2 fleet average below the required 95g/km in the coming years, expect higher-powered models to utilise this plug-in hybrid technology, rather than offering larger, or more highly strung internal combustion-only options.

Release dates for the new Arteon Shooting Brake remain unknown, but we’ll see more around the Geneva show, with sales likely to start in Europe later this year.