Get ready for the return of the Volkswagen Golf GTI Clubsport, with more power, more focus and plenty of rivals to squash 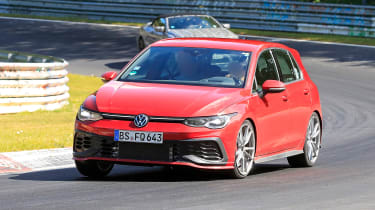 The new Volkswagen Golf GTI Clubsport, which will sit below the all-wheel-drive R and above the standard GTI, has been spied testing, gearing up to rival the more focused hot hatchbacks of the segment such as the Renault Mégane RS Trophy and Honda Civic Type R.

Rather than use the TCR nomenclature of the last top-level Golf GTI, Volkswagen will return to the Clubsport denomination from earlier Mk7 GTIs, this due to Volkswagen Motorsport’s transition to the electrified eTCR motorsports series. That’s no bad thing though, as the previous Golf GTI Clubsport, especially in Clubsport S form, proved to be the most exciting interpretation yet of a Golf hot hatchback, something the last TCR never quite lived up to. 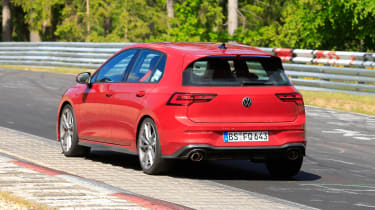 We can tell this is a more focused GTI Clubsport due to the distinctive design elements on this prototype that are missing from the somewhat understated standard car. Obvious are the larger 19-inch wheel and tyre package, more substantial brakes and bigger rear exhaust outlets.

The rear wing, as seen on various Golf R prototypes, is also new, but it’s the new nose that differs most acutely from standard GTI models, with a larger lower intake that will keep the more highly strung turbocharged four-cylinder engine behind it cool. 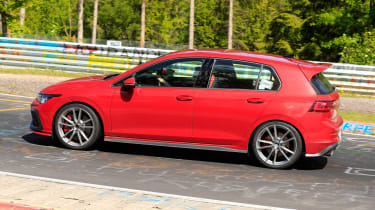 As standard, the incoming eighth-generation Golf GTI was launched with a conservative 242bhp power figure, but the GTI Clubsport is expected to build on the TCR’s 286bhp, possibly sitting at just under 300bhp to keep it on its toes against its more powerful front-wheel-drive rivals. The next Golf R, which as now will specialise in a more rounded all-weather approach, will likely gain even more power from its EA888 four-cylinder motor, with somewhere around 328bhp, making it the most powerful production Golf yet.

It remains to be seen whether the new GTI Clubsport will be available with a manual transmission, but Volkswagen’s dedication to offering one in the standard GTI is a good sign. The rest of the chassis will otherwise incorporate all of the Volkswagen Group’s best bits, so expect an electronically controlled limited-slip differential on the front axle, adaptive dampers and a version of the new Golf’s more tunable traction control system – this allows a more finely tailored intervention similar to the yellow traction control dial found on the Mercedes-AMG GT R.

It’ll need all the hardware it can get too, as the new Golf GTI Clubsport won’t just have the updated Mégane RS Trophy and Civic Type R to compete with when it arrives later this year, but also the hot new Cupra Leon, and even Toyota’s new GR Yaris. The second half of 2020 is going to be a very good year for the hot hatch.