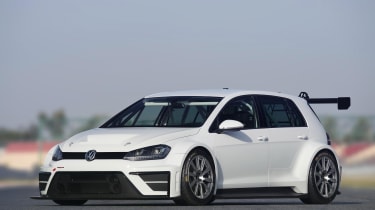 Wider than a Lamborghini Aventador and arguably more pugnacious in the styling department, this is Volkswagen Motorsport’s vision of a Golf-based touring car.

It's much more than a marketeers fantasy, however. Built in line with the regulations governing the incipient TCR International Series, the concept is Volkswagen’s way of gauging demand for a Golf-based racing car competing at a less eye-wateringly expensive level than top-tier series such as the WTCC.

As such, the car will debut under the auspices of Liqui Moly Team Engstler during the eighth round of the 2015 TCR series at the Red Bull Ring this weekend. It will compete against a range of homologated hatchbacks, including the SEAT Leon, Honda Civic, Audi TT and Vauxhall Astra.

Of more concern to the majority of evo readers will be the encouragingly snug relationship between TCR racers and the road cars from which they are developed. Gearboxes, limited-slip differentials, engines (and their positioning) and intercoolers all have to be production-spec. Much like anyone on a public road, the drivers are also severely limited in the electronic alterations they can make to the cars’ chassis dynamics.

Just as endurance racing helps Porsche consistently turn out cars as capable and enjoyable as the 911 GT3, the TCR series could well do the same for more affordable performance cars.

This particular car uses the same turbocharged four-cylinder petrol engine that powers the inspired Golf R – only stoked from 296bhp to 325bhp – and a dual-clutch DSG gearbox. Unlike the road car, however, power is sent to the front axle alone, which should result in interesting handling traits given the 302lb ft of torque on offer. With a driver onboard, the car will weigh at least 1260kg. 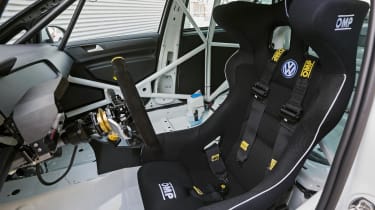 Eighteen-inch Michelin-shod wheels, an inverted rear wing and obscene wheelarches stand the concept out, while exhaust outlets at either end of a subtle diffuser and a jutting chin spoiler complete the ensemble of racing appendages.

The austere interior isn’t dissimilar to that of Sébastian Ogier’s Polo WRC car (minus a seat for the co-driver), and features the same paddles behind the steering wheel as well as a full roll-cage.

In building the concept, Volkswagen Motorsport borrowed expertise from brand subordinate SEAT, which already races the Leon Cup Racer in the TCR series and has successfully transferred that expertise to the Leon 280 Cupra, an evo favourite. With a prodigiously powerful Golf variant based on the R400 concept and a roll-cage-clad ‘Clubsport’ version of the GTI waiting in the wings, Volkswagen will want to do the same.

‘When developing the Golf-based concept car, we are able to fall back on the resources at Volkswagen. This reduces both development time and costs. We will also use the rest of the season to test the car under competitive conditions and evaluate a possible customer racing project from 2016.’