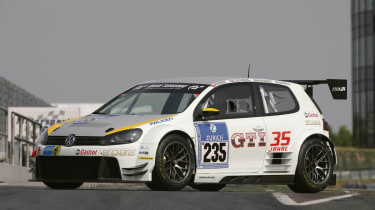 Volkswagen is keen to further cement the credentials of its Golf and Scirocco models with the purpose-built 450hp all-wheel drive Golf24 and 330hp natural gas-burning Scirocco GT24-CNG to compete in this weekend’s Nurburgring 24-hour race.

To celebrate the 35th anniversary of the Volkswagen GTI, the factory has created the 2.5-litre 5-cylinder Golf24 for the sole purpose of taking on the toughest endurance race in the world, which regularly sees more than 200 competitors charging around the Green Hell in rapidly changing weather conditions over a 24-hour period.

After a 1-2-3 class win and 16th overall placing for the factory Scirocco CNG at last year’s event, Volkswagen has elected to enter only two Sciroccos this year, but will field three of its monster Golf24 cars, which could be up for a top-ten finish if the weather turns wet.

The Volkswagen driver line-up is just as impressive as the cars, with Johnny Herbert and Mark Blundell teaming up with seasoned Nordschleife lappers Peter Terting and Patrick Simon as just some of the names to pilot the three Golf24 racecars over the weekend.