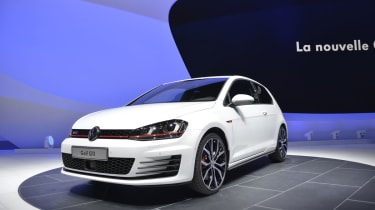 Volkswagen has unveiled the new mk7 Golf GTI at the 2013 Geneva motor show. The latest generation hot hatch will be available in two guises – the standard GTI and the more powerful and driver-focused GTI Performance.

The new GTI uses a 2-litre turbocharged four-cylinder petrol engine, producing 217bhp as standard and 227bhp in the Performance variant. The GTI Performance features larger brake discs and for the first time ever in a front-wheel-drive VW, a mechanical limited-slip differential. Both cars produce 258lb ft, with the Performance reaching 62mph just 0.1sec quicker than the base GTI, in 6.4sec. Top speed is also marginally improved with the £1000 upgrade, the GTI and GTI Performance topping out at 152mph and 155mph respectively.

Both versions are equipped with emissions-saving stop/start technology and average a claimed 47mpg, while at 1283kg, the mk7 Golf GTI weighs 35kg less than its mk6 predecessor. A six-speed manual gearbox is offered as standard, with a six-speed DSG twin-clutch transmission a £1415 option. Inside, the GTI gains the usual sporting accoutrements over the standard Golf, including sports seats, bespoke instruments and gear leaver and the now-iconic tartan cloth upholstery. Standard equipment includes a DAB radio, Bluetooth and dual-zone climate control. In terms of cosmetic upgrades, the car looks very similar to the GTI Concept shown at the 2012 Paris Motor Show, aside from new, more intricately designed alloy wheels. Prices are expected to start just below £25,845 for the standard three-door car, the five-door commanding £655 more. The new Golf GTI’s order book opens on March 26 with first deliveries of the car in June.