2018 Volkswagen Polo GTI – has it got what it takes to be a proper drivers’ car? 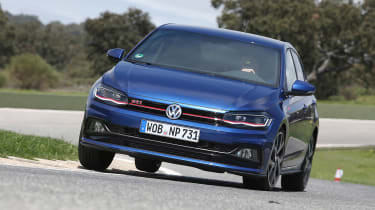 After its official reveal at the 2017 Frankfurt Motor Show, evo was invited to Wolfsburg to have a proper poke around the new Volkswagen Polo GTI. The new performance version of the five-door only, 6th generation Polo is bigger, more powerful and more impressive, technically, than any of its predecessors – as is the nature of car development. But there’s a lot to suggest that, rather than being simply better and faster than the old model, this Polo GTI could be a real contender in the fight for the small hot hatch top spot.

> Read our review of the current VW Polo GTI

With 197bhp, the new Polo GTI is right on the money in terms of power when compared to its rivals.  Next to the last Polo GTI, the new model’s engine puts out 8bhp more than before and is 0.2-litres bigger. Instead of getting an all-new engine, though, the Polo is fitted with the very familiar 2-litre EA888 motor that resides in many performance VWs, including the Golf GTI. But rather than the 227bhp engine in the base Golf GTI, the performance Polo gets a detuned 197bhp version. Still, that’s good enough for a 0-62mph time of 6.7sec. 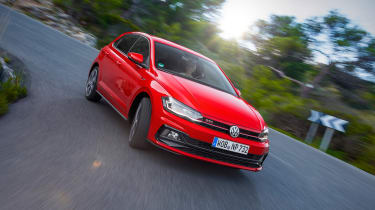 The reason the smaller Polo benefits from the bigger car’s engine is that, despite being a whole dress-size smaller, it is actually based on the same body architecture. It might not have the multi-link rear axle from the Golf, making do with a torsion beam instead, but the MQB underpinnings mean the new Polo GTI promises to be the most sophisticated yet. But, not too sophisticated. Because, so as not to step on the toes of its bigger brother, the Polo GTI has a its own, more playful character along with its less powerful engine, too. It’ll still be more grown up than the forthcoming Up GTI, which will be the third and cheapest car in GTI family.

Ralf Kölling, who’s in charge of all small car operations at Volkswagen and, by default, the Polo GTI too, explains how the GTI hierarchy will work: ‘It took a lot of time to find the right balance. This is the thing with the Polo GTI, you can drive it really sportily, but you can use it daily. Have the engine going like hell, if you want, but you can also use it in stop and go traffic, no problem. Everything is comfortable, but you can also have it… a little bit hotter. That’s the fun thing.

‘The Polo is lighter, it’s shorter, its better. And, if you’d like more performance on the road; that’s a little bit more the Golf. For agility, you need less weight, you need a shorter wheelbase. If you want to have the feeling from the first Golf GTI, then you pick the Up. But the Polo, for me, is perfect.’

> Find out more about the new VW Up GTI

To give the GTI its sporty and exciting nature, VW has given the standard Polo a thorough going over. The GTI is 15mm lower thanks to 38 per cent stiffer front springs and 39 per cent stiffer rears, as well as new fixed-rate dampers all round. The Polo GTI also has XDS as standard, VW’s pseudo-LSD that uses the brakes to nibble at the inside front wheel help improve traction.

As well as the standard passive dampers there are optional Sport Select dampers that can be switched, along with a different throttle map and steering weight, between two rates: Normal and Sport. What’s more, the Polo GTI’s structure is 28 per cent stiffer than the old five-door model. 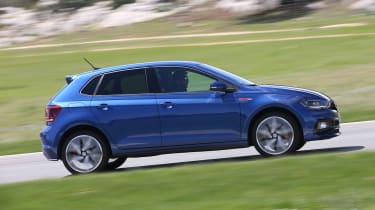 Kölling is a man after our own hearts: he prefers the Polo GTI with a manual. ‘There are some people like me, a little bit more hardcore, I prefer the manual one. But the market is asking for DSG, not manual. We have to have customers for it, we don’t build the car for me.’ The Polo GTI will initially come with a DSG transmission, but undoubtedly thanks to Kölling’s enthusiasm, there will be a manual version available shortly after.

Visually the new GTI shares the same conservative styling as the regular Polo, but raises the visual appeal with a usual combination of GTI specific design flourishes. At the front, a honeycomb mesh grill appears alongside a red trim stripe that also bleeds into the headlights on models equipped with the optional LED headlights.

A subtle black under-body skirt loops its way from the front bumper, around the sides towards the rear bumper where there are a set of twin GTI specific tail pipes. These body modifications are set off with 17-inch or optional 18-inch alloy wheels and GTI badges.

> The sensible hot hatch: read our review of the VW Golf GTI

Inside, the GTI features tartan-trimmed seats, a golf ball gear knob, and a chunky flat-bottomed steering wheel. Instead of conventional dials there’s a 10.25-inch digital display that shows speed and revs as well as navigation, car data and entertainment info. To the side of that, in the centre of the interior, is the infotainment screen. It sits on the same plane as the dials, much higher than in other VWs, so the driver’s eyes don’t have to move too far from looking out of the windscreen. 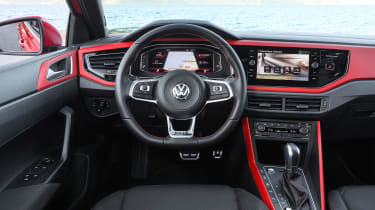 With a familiar engine and architecture, as well as subtle and neat styling, the Polo GTI is far from dramatic. But small hot hatches have never needed masses of technology or headline grabbing figures to be captivating or involving. That’s brilliantly demonstrated by the stiff competition the Polo will have to go up against, like the Peugeot 208 GTi by Peugeot Sport and the recently discontinued Ford Fiesta ST.