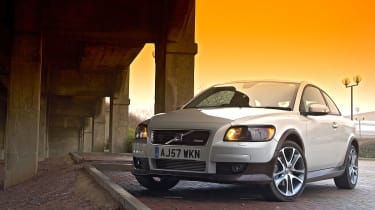 If our 234bhp ‘Grand Challenge’ Lexus Soarer smokes its inside rear wheel like a bastard (as they say) at the slightest provocation, then how does our new Volvo C30 T5 manage to put down just 7bhp less through its front wheels? The answer is pretty darn well, actually.

Arriving the week before Christmas with a mere 46 miles on the clock, I couldn’t help but think ‘my’ C30 T5 looked pretty cool with its Cosmic White metallic paint and contrasting Java Pearl bodykit (a combination costing an extra £500) making it look like that first C30 concept car. The specification looks pretty tasty too, this car coming loaded with an awesome Dynaudio sound system (£1150), a communications pack (integrated phone and fiddly satnav, £2150), bi-xenon lights (£775), Rear Park Assist (£350) and a passenger airbag cut-off switch (£25). When added to the £23,495 ‘R-design’ SE Sport starting point (which, amongst other things, brings 18in alloys and a leather interior), all of this takes the total to a whopping £28,445, but then this is a premium product.

The plush white-on-black sports seats have already attracted many positive comments from friends, and I love the clarity and simplicity of the dash with its blue R-design dials and ‘floating’ centre console. It’s a shame the latter doesn’t quite hide all the wires behind it, but it’s still welcome and part of the reason why the C30 doesn’t feel like just another hot hatch. In fact, with its individual rear seats it feels like it’s bridging the gap between hatchback and coupe. It’s certainly got a feel-good factor strong enough to rival the Audi TT’s.

The Christmas period saw the running-in phase completed in a little over a week (strictly speaking no running-in is required, but I’m old-fashioned) and revealed that the T5 is a great motorway cruiser, even if it does want to sit at three-figure speeds all the time.

The warbling turbocharged 2.5-litre five-cylinder can get the large steering wheel writhing in your hands as the front wheels hunt for the best grip, but, as I’ve already hinted, you can easily use all of the T5’s 227bhp without troubling the traction control. The only downside appears to be a strong ‘self-steering’ pull at high speeds that can only be described as feeling like the result of a gyroscopic effect at the front wheels.

I’ve yet to take the T5 down a favourite B-road, but roundabouts have revealed an impressive level of cornering grip from the Pirelli P Zero Rossos and a nicely adjustable chassis, the tail coming into play and staying completely predictable if you lift off the accelerator to tighten your line. The stability control is unobtrusive too, which is a good thing, as you get the impression you’re not supposed to switch it off – to do so you don’t just press a button on the dash but have to fumble your way through the computer instead.

So, I’m impressed with the T5 so far. In fact, dare I say it, I think it’s a better car than the nose-heavy Focus ST it’s based on. Pity, then, that next month I’ll be handing the C30’s keys to a new custodian as it’s time for me to say goodbye. I’m chuffed that I’ve had the chance to run the quirky C30 T5, though, if only for a short while. Adjö.