A year after it broke the four-door Nordschleilfe lap record Volvo reveals it to the public, even though the time has since been beaten 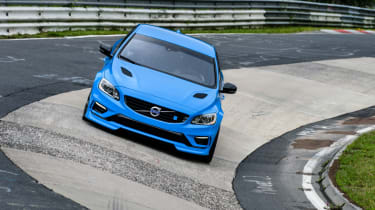 The Nurburgring 24 Hours is this weekend, and with so much attention around the circuit it would be the perfect time to announce a record breaking Nordschleilfe lap time. Volvo has taken this opportunity to announce that its S60 Polestar broke the 12.94 mile lap record for a four-door (or more) car.

The only problem is, the time was set last year. Since then the S60’s time of 7min 51.1sec has been eclipsed by both the Honda Civic Type R (which has five doors) and the Alfa Romeo Giulia Quadrifoglio making the Volvo’s triumph seem somewhat irrelevant.

Volvo has sat on this information for 12 months because the time was set during a secret test. The team that runs Volvo’s World Touring Car Championship cars, Cyan Racing, used the circuit after the German round of the WTCC race to develop the S60 Polestar road car. 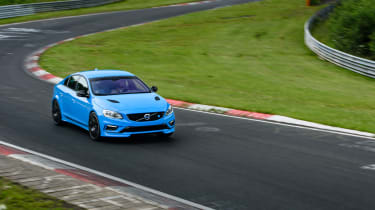 The team wanted to inject some of the information it had learnt through racing into Volvo’s hot saloon. But as well as improving the car Cyan Racing inadvertently broke the lap record during its testing, but then didn’t tell anyone.

Apparently what it learnt during that valuable time on the Nordschleilfe was so important and significant that it had to keep the entire test a secret for at least a year. Exactly what was garnered from eking out a 7min 51.1sec lap from the 362bhp four-wheel drive saloon, Polestar hasn’t divulged but it says the knowledge has been put to use in both the road car and the current WTCC race car.

> Read about the Polestar upgraded for the Volvo S90 and V90

Revealing a record breaking lap time a year after it has been set, and once it has been surpassed too, seems like a huge mistake, or at least a missed opportunity. However, the unofficial unregulated nature of Nurburgring lap times means that none of the times are all that relevant. With no organisation or official body monitoring the legality of the laps, or just how standard the cars are, normal production cars can’t really be compared by their Nordschleilfe lap times. The S60 Polestar that Volvo used to set the time has been modified from standard with Michelin Pilot Sport Cup 2 tyres and a roll cage.

That doesn’t mean that Nürburgring testing is pointless. The specific demands of the long and tortuous circuit has helped produce some wonderful and fantastic cars - the current crop of extreme hot hatches proves this. So rather than focussing on where the S60 Polestar ranks on the Nurburgring leaderboard, we should celebrate its astonishing time and look forward to driving it in the future.