The 981 Boxster Spyder is one of our favourite sports cars, but Alfa Romeo's 4C spider is a tough car to resist. Or is it? 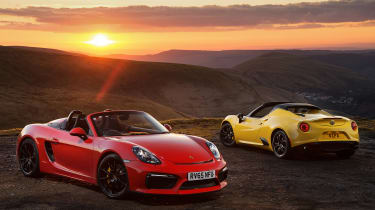 The roll is well managed, too; the 4C never completely falls away, the body finding support as it’s pushed and the roll contributing to the ample amounts of grip the 4C has to offer. In the dry, it will carry huge speeds into corners and has plenty of traction out of them, too. But finding the conviction to really commit is difficult. For a moment, just as you come off the brakes, you feel disconnected from the steering and you aren’t quite sure what the 4C is going to do: grip and turn in, or understeer. It’s only for a split second, but it’s enough to sap your confidence.

But it’s the way the steering is constantly distracted that really undermines the Alfa. As Dan says: ‘The steering should be the highlight of that car and I could live with everything else – the really boosty engine, the slightly brittle ride, the ropey cabin – if it didn’t tramline so much. That’s what kills it for me.’

The Boxster Spyder is the yardstick against which all roadsters can be measured. And – as you may have guessed by now – the 4C Spider doesn’t even come close. The philosophy behind both cars is very similar: uncompromised, driver-focused, £60,000-ish mid-engine sports cars with elementary folding roofs. It’s just that the Porsche fulfils its brief so much better than the Alfa. 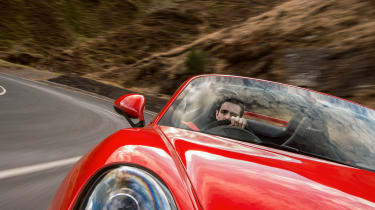 There’s cohesiveness to everything about the Boxster. Where the rather uncomfortable ride in the 4C feels at odds with the amount of roll and pitch, the Boxster’s chassis strikes just the right balance. The ride doesn’t settle until you get to 50mph, then it gains real fluidity. It remains relatively firm, but there’s enough pliancy for it not to be thrown around by bumps. There’s also very little roll, though not unnaturally so.

To feel you’re working the chassis you need to be pushing it hard. In a standard Boxster, the engine can feel heavy and – strangely, being a flat-six – rather high as the body rolls. The Spyder, however, keeps everything much more contained and under control. There’s never any unruly weight transfer. The impression is that all the weight is confined within the axles, the car pivoting around the driver.

The Spyder has the quicker steering rack from the 911 Turbo, but it’s not easy to gauge how much grip the front axle has. That’s mostly down to the front tyres being well within their limits on the road. The Spyder also lacks the energetic, physical and immediate front-end of the Cayman GT4, and won’t be goaded into oversteer quite as easily. But it always feels nimble and direct. You can turn in with absolute confidence, the steering’s response and the chassis’ poise in wonderful harmony.

As soon as you’re on the throttle the limited-slip diff engages, the rear adopting attitude. It’s not oversteer that needs any sort of correction, but enough for you to know you can adjust your line and balance the car on the throttle. The process is wonderfully intuitive, the chassis’ transparency combining with the glorious howl of the engine to egg you on.

The Boxster Spyder isn’t perfect. The increase in capacity over the standard Boxster’s engine does make the annoyingly high gearing that plagues all 981 Boxsters and Caymans less of a problem. You no longer feel a need to change into first in tighter corners. However, lower gear ratios, or a lower final drive, would make it more enjoyable still. You’d be able to use the rear axle more, enjoy the Boxster’s balance better and exploit the diff more often. As it is, you need real commitment to reach the limit of the Boxster’s grip, more commitment than you can really employ on the road most of the time.

The Boxster Spyder’s ultimate grip, involvement and the intuitive nature of the whole driving experience puts it poles apart from the 4C Spider. Also, the Porsche’s sonorous flat-six doesn’t just sound better than the Alfa’s turbocharged four, but it’s more powerful, torquier, and its linear delivery makes it so much more gratifying to use. If it’s pure attention you crave, then the 4C Spider does trump the Boxster. However, the Alfa’s brittle ride, shoddy interior and dreary sound make it unpleasant even at low speed. And it’s not as if the Boxster doesn’t attract enough attention; it’s just not always the kind of attention you want.