The wheels of the Brera S are virtually identical to those of the 8C, and that’s pretty much as far as the similarities go... 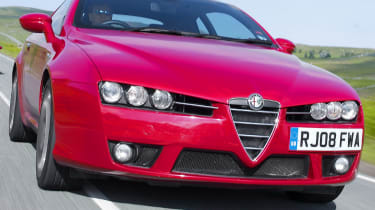 This should come as no surprise really, because the unutterably desirable 8C is as far removed from other Alfas as the V8-engined Montreal was from the rest of the range back in the ’70s.

The Brera S’s musical V6 sounds flat compared with the rousing cacophony of the 8C’s V8, and when the beautiful 8C sidles through town, the Brera becomes invisible. But everything is relative. Compared with the regular Brera, the ‘S’ (for Speciale) is just that.

The stock Brera 3.2 has natural charm, as we discovered in evo 106, but it’s seemingly undecided if it’s a sports car or a luxury GT. Alfa Romeo GB’s marketing director, Nicholas Bernard, held the same view and decided that it should be a sports car. Italy consented to an approach to Prodrive, and the end result is that the V6 Brera changed from four-wheel drive to front-drive, a configuration previously unavailable. The fact that the S copes easily with 256bhp coursing through its front wheels is testimony to the quality of the development work carried out by Prodrive.

Mind, you’d perhaps expect nothing less; Alfa GB has spent £1m creating a Brera more relevant to UK drivers and UK roads. The project has taken a year, including full durability testing and final sign-off by Alfa in Italy, and just 500 examples will be built, exclusively for the UK. The cost? Around £1450 more than the stock versions, at which level Alfa GB says it merely breaks even.

If you’ve wavered over a Brera you’ll fall instantly in love with the S on its bespoke 19in rims. This is surely how the car looked in the concept sketches; sitting low on out-size rims. It instantly renders the standard car frumpy, though some reckon it’s always looked like that. I reckon if Alfa offered the rims and slightly lowered suspension for £1450 on stock models, uptake would be near 100 per cent but that won’t happen, says Bernard. He’s keen to make this a true limited edition, just like the 8C…

The Brera S is also offered with the 182bhp 2.2-litre four, which gives a £3500 saving over the 3.2’s £28,450 list price, but we can’t recommend it. It’s never been a firecracker of an engine, and the handling with the S chassis is now so good that it feels gutless.

The V6 is the one. Ditching the four-wheel drive gubbins and adding those lovely rims (worth a 2kg saving per corner over the stock 17s) contributes to a weight saving of almost 100kg since we last drove a V6 Brera, so the performance is notably crisper. All 2008 Breras feature hollow anti-roll bars and aluminium uprights, which also save weight. Prodrive has added Eibach springs which are 50 per cent stiffer, and bespoke Bilstein dampers.

Certainly there’s an edge to the ride, but it’s a well-judged firmness beneath which is compliance and suppleness, so it’s not a car that gets crashy and harsh when the surface goes to pot. Better than this is the mechnical grip and traction created by the new set-up. The mass of the V6 engine is kept well in check, allowing the tyres to get on with the business of getting the torque and power to the road. Point the Brera into a turn and the initial roll motion is tightly controlled, giving a feeling of clean and direct response through the steering wheel, and it stays on line and hooked up when you stoke up the engine and aim at the apex.

Switch traction control off, get really aggressive with the throttle and in the dry you might just succeed in breaking the traction of the inside wheel. Indeed, traction is so good you can’t imagine needing the four-wheel drive of the standard model, even in the wet.

At a little over 1500kg it’s still no lightweight, but across country the Brera feels confidently all-of-a-piece and much more precise and finely adjustable than the stock V6. There’s plenty of grip from the 235/40 P Zero Neros, and at a brisk road pace it feels poised and neutral. The wheel might not brim with feel but the steering is well-weighted and quick enough, while the manual shift is pleasingly mechanical, giving a decent feeling of connection.

The best bits of the original 3.2 – the engine and the interior – are slightly enhanced. The V6’s delivery and creamy, characterful score are now a fraction more insistent thanks to the weight savings and exhaust tweaks. Inside, the facia and attractive, pleated leather seats feature red stitching, and there are unique instrument markings.

The Brera S is no 8C but it shouldn’t be mistaken for a stock Brera wearing glamorous wheels either – it’s far better than that. Prodrive’s chassis work releases its inner sports car, while weight savings give the performance more sparkle. If you’ve got an itch to have a Brera, trust us: the only model that will scratch it is the V6-engined S.