Alfa's baby MiTo receives the award-winning 98g/km CO2 TwinAir engine, but is it as much fun as the 500? 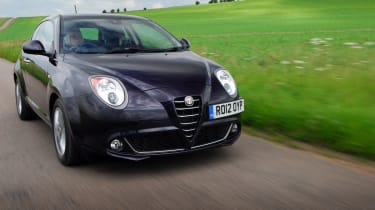 It’s the latest version of Alfa’s successful super-mini, this time powered by the revolutionary two-cylinder ‘TwinAir’ 875cc engine we first saw in the Fiat 500, and it allows the Mito to dip under the 100g/km CO2 barrier, making it exempt from VED in the UK, and free from the congestion charge in central London.

Well, it has to be that engine. It's won numerous awards since it was launched in 2011 including engine of the year, best new engine, green engine of the year and best sub 1.0-litre engine. Basically, it’s a turbocharged twin-cylinder engine with some very clever technology, helping it to deliver excellent low-down torque (peaking at 106 lb ft at a mere 2000rpm in Dynamic mode) and 85bhp at 5500rpm. It doesn’t sound like much, but what it lacks in outright performance it makes up for in character…

In a word: fun! It makes far better progress than the woeful performance figures might suggest (0-62mph in 12.5secs, 108mph flat out), so long as the DNA switch is set to ‘Dynamic’, which allows the engine to produce its peak torque and forces the small turbo to spool-up quickly - delivering full boost from just 1500rpm.

Alfa’s TwinAir comes with a six-speed manual gearbox, and if you want to make decent progress, then keeping the engine in its ‘happy zone’ between 1800-5000rpm is vital. There’s no automatic option, but the manual ‘box is such a pleasure to use regular cog-swapping is no problem, and all the time you’re kept entertained by the seductive warble of that twin-cylinder engine.

This is one of those car that loves to be driven flat out at every occasion, and thanks to the very quick steering, and the tiniest movement on the steering wheel fires it round through the bends like a mini hot-hatch, and it’s not long before you find yourself having a ball.

Its closest rival is probably the Fiat 500 TwinAir, but although it shares the same engine, the 500 is a fair bit cheaper with prices starting from £11,660, and lighter by 100kg. This is balanced out by the MiTo’s has a higher quality feel, and the longer wheelbase gives it a slightly better ride. So long as you stick with the standard 16-inch wheels that is. The optional 17-inch wheels look great, but the ride deteriorates quite badly. Surprisingly, the MiTo TwinAir has a lower insurance rating (9) than the Fiat TwinAir (12).

There’s also a diesel MiTo (1.3 JTM 85bhp) delivering just 90g/km CO2 - but driving one of these straight after driving the TwinAir highlighted the extra bulk of the four-cylinder diesel engine, as well as the inherent lack of character in what is otherwise a very good unit. The diesel might be the sensible option, but I’d miss the twin-cylinder warble and general enthusiasm of the TwinAir, even though fuel economy is bound to be far better with the diesel (Alfa rate it at 80.7mpg on the combined cycle).

The Alfa MiTo TwinAir costs from £14,150 in ‘Sprint’ spec, rising to £15,350 for the ‘Distinctive’ version (adding extras like 17-inch wheels, sports seats, red callipers) and is expected to be the best selling model in the UK, accounting for 38% of all MiTo sales in a full year. Alfa UK is offering 0% finance, five-year 100,000 mile warranty (on all cars sold by the end of September 2012), and servicing intervals are 18,000 miles.

It’s one of those rare cars that proves the old adage that it’s more fun to drive a slow car fast than it is to drive a fast car slow. Combine that with cute looks which can be endlessly personalised, and Alfa should have a hit on its hands with this pert little bundle of Italian fun.

Ahead of the final examples rolling off the production line this Spring, Bentley has revealed a final-edition Mulsanne
Visit/aston-martin/dbx-suv/15413/aston-martin-dbx-prototype-review-the-best-suv-yet