With 249bhp and 236lb ft available to propel the 1103kg Alpine in standard form, it’s no surprise to find it’s a quick little car, with the 0-62mph sprint taking a claimed 4.5sec, a tenth quicker than that of a Cayman S.

When we tested the car we managed a best of 4.6sec to 60mph, which is a strong result given that all our assessments are run two up and with a full tank of fuel. Yet it’s the A110’s elastic mid-range acceleration that really impresses, the combination of lag-free turbo torque and relatively short gearing helping the Alpine set a scorching in-gear pace.

The S receives a considerable bump in power, taking figures to 288bhp and 236lb ft of torque, enough for a quoted 4.4sec 0-62mph time and a raised top speed of 162mph.

Overtaking slower traffic is a doddle, the A110 simply firing by with a squeeze of the throttle. In real world situations the Alpine is probably as fast as you’ll ever need to go, zapping straights with an intent that’s genuinely surprising. The lack of weight and hearty torque also gives the A110 a responsive attitude to movements of the throttle, so you always feel able to meter out power as accurately as you like – not a given in a turbocharged engine even in 2020. 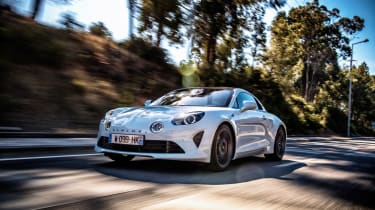 While gearchanges could be even quicker, they're also snappy enough in Sport mode that you'll rarely feel short-changed (no pun intended). The 'box will refuse changes if it feels you're downshifting a little too early, but happily, won't change up automatically at the limiter, so it's mostly still down to you as a driver. The A110's we've tested so far have all come with the optional sports exhaust, and it's a compelling option. There's a cultured growl at idle and when you're cracking on the system will emit burbles and pops off-throttle. The main soundtrack though is of a rorty induction note – and it's a far more appealing sound than Porsche's flat four.

Given its small dimensions and slippery shape, it’s no surprise to find the Alpine will easily hit its electronically limited 155mph (162mph in S-form). However, its light weight, light steering and the relatively high-set mid-mounted motor mean that at really high speeds the A110 feels flightier than the rock-solid Porsche Cayman.