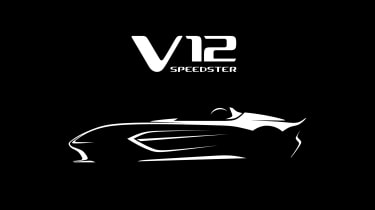 Aston Martin has revealed its plans to put a speedster model into limited production, forming a halo model featuring a front-engined V12 engine and an open-air cabin, free of a front screen or side glass. If nothing else than a case of curious timing, it comes just months after McLaren revealed its own speedster model called the Elva, although the two are quite far removed if you ignore the flies-in-teeth body type.

Unlike the McLaren, which is powered by a mid-engined twin-turbo V8 engine, the Aston Martin V12 Speedster, as its name suggests, will offer an extra four cylinders with its 5.2-litre twin-turbo V12, producing what Aston says will be ‘around 690bhp’ and 516lb ft of torque – a small, but notable drop on the 715bhp and 663lb ft produced by the flagship DBS Superleggera. This, like the rest of Aston’s V12 range, will be front-mounted and connected to the rear wheels via an eight-speed ZF automatic transmission.

The body will likely share the aluminium VH-II architecture found in the DB and Vantage ranges too, but with various structural modifications to make up for the Speedster’s lack of a roof and windscreen.

The V12 Speedster has been designed in-house by the Q-division, and will be limited to a maximum of 88 units manufactured in its Gaydon facility, with the first cars reaching customers in the first quarter of 2021.

The design has yet to be revealed short of a graphic sketch, but the classic front-engined proportions remain from Aston’s wider range, while any aero-trickery – as found on the McLaren Elva – is unlikely thanks to the V12 powertrain in the way. The aesthetic language is said to also reference both Aston Martin’s legendary DBR1 Le Mans racer from 1959, as well as the CC100 Speedster Concept revealed back in 2013.

And if McLaren’s mid-engined carbon-fibre bodied speedster isn’t quite as appealing as a front-engined V12 one you’re in luck. With a price likely to sit at around half that of the Elva’s £1.4m price point, the Speedster could almost be considered a bargain too.