evo was invited to the Aston Martin Racing factory for an audience with the new, 2018 Aston Martin Vantage GTE. 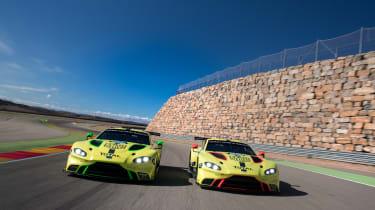 Ahead of the forthcoming 2018/19 WEC (World Endurance Championship), evo paid a visit to Aston Martin Racing headquarters, at Prodrive’s facility in Banbury, to meet the new Aston Martin Vantage GTE.

AMR (Aston Martin Racing) finished last season on a high, sending off the outgoing Vantage GTE with a win at the Le Mans 24h. At power circuits, such as Le Mans, the old car could exploit its ‘dragster’ status – a label applied by many at AMR – driving home its advantage on the straights thanks to its slipperier form.

2017/18 marked the old GTE Pro’s seventh season, however, and it showed: outdated and thus ill-equipped, at circuits other than Le Mans, it was unable to challenge fresher competitors, harbouring more contemporary technology, such as the Ferrari 488 GTE and Porsche 911 RSR, for podium places. In response, AMR has engineered a more rounded car fit to take the fight to the competition more consistently.

As the regulations dictate, the Vantage GTE uses the same turbocharged Mercedes-AMG V8 as the road car. The switch to forced-induction – a first for AMR  – posed new challenges and chief amongst them was cooling, a weakness of the previous car according to Paul Howarth, AMR’s Team Principal.

The engine’s hot-vee layout generates significant heat around the two turbos – nestled between the cylinder banks – which must be dissipated in order to maintain optimal operating temperature, and crucially, prevent a potential performance drop-off or engine failure.

Many of the modifications to the engine, which sits 100mm lower than in the previous car, including the bespoke Borg Warner turbos and a new dry-sump system, therefore have been influenced by cooling requirements. To ensure the durability of the revised engine the new GTE was put through 20,000km worth of testing. 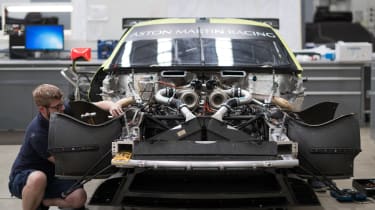 How much power and torque the engine actually produces has yet to be determined. Following the WEC Prologue (in April) the field of entries will be assessed by the FIA against the BoP (Balance of Performance) criteria, which aims to level the playing field. For the Vantage this means a boost pressure limit will be applied to the turbos to cap the engine’s output.

XTRAC was retained as the gearbox supplier and has built a brand new sequential unit to mesh with the new engine. A visual comparison of the old and new gearboxes, side-by-side (see the picture below – old left, new right), highlights a significant size difference between them. Clever packaging of the ratios has allowed XTRAC to shrink the gearbox, which shifts electronically, so it’s easier to integrate into the car. 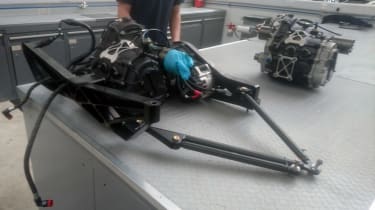 AMR shuffled it’s band of technical partners involved in the development of the new GTE competitor to achieve the best results. Ohlins supplies the suspension in place of Bilstein, while Brembo has made way for Alcon for brake development.

Ohlins’s five-way adjustable dampers comprise just one element of the suspension set-up, which is mounted to the chassis with double wishbones, front and rear.

Braking performance proved a weak point of the old car and Alcon seem to have addressed the issue. Darren Turner, AMR driver and Le Mans veteran, confirmed this recaling his initial test of the new car. ‘The brakes are a big step forward for driver confidence and it will encourage more wheel-to-wheel action than the last car’. 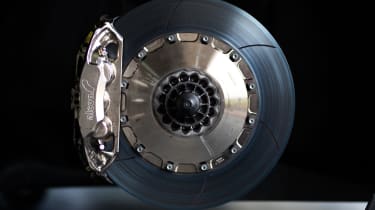 New calipers – six-pot upfront and four-pot at the rear –  account for the extra stopping power. Boasting greater structural integrity, via extra bracing, they deliver a firmer pedal with more consistent feel according to engineers. Helping to realize the extra braking performance are new Michelin tyres, which shod a set of forged lightweight magnesium wheels.

To get down to the regulation base (dry) weight of 1245kg, the body panels that hang from the lightweight aluminum chassis – based on the road car – are carbonfibre, as are the splitter, diffuser and adjustable rear-wing. Elsewhere, efforts to improve the car’s aerodynamic properties mean AMR uses a flat floor as well.

The old Vantage GTE was revised ahead of the 2013/2014 season to comply with regulation changes, ultimately allowing AMR to create the ‘dragster’. An example of this aerodynamic-honing saw the side skirts slimmed down to reduce drag and increase top speed. The design of the new car however offers greater downforce according to AMR. 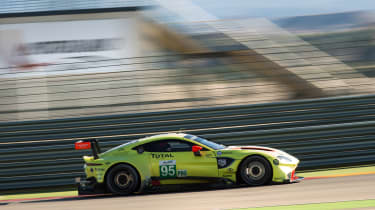 Discussing the car’s overall development we asked Paul if AMR might suffer from being behind on the development curve. The car is brand new and other teams, such as Ford and Porsche, have evolved their cars over the last few seasons. He said, ‘we’re in a controlled formula which is good, it allows everyone a bit of the cake. With a new car you get treble the amount of testing, so the team becomes a lot sharper, the drivers are driving a lot more mileage. The thing is to maintain that level of intensity throughout a season’. 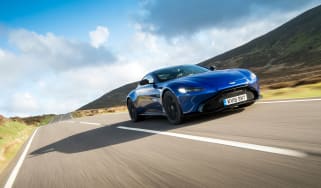