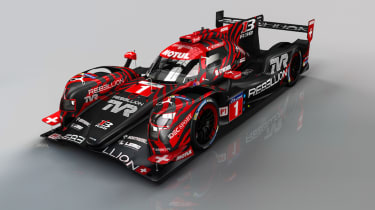 TVR has announced its return motorsport and Le Mans, revealing that it is to become a technical partner of Rebellion Racing, the Swiss based FIA World Endurance Championship team.

Starting at this weekend’s season prologue at the Paul Ricard circuit in France, the TVR name will once again have a presence in the paddock when the Rebellion R-13 LMP1 prototype begins its preparations for the forthcoming 2018-19 FIA WEC Super Season.  This new format will see the teams contest two Le Mans 24 Hours in a single season.

It is ten years since the TVR name has had any involvement with motorsport and 2018 will mark the 13th anniversary since its last competed at Le Mans, when the Racesport Peninsula TVR Tuscan Speed Six GT2 driven by John Hartshorne, Richard Stanton and Piers Johnson completed 256 laps of the twice round the clock race. In the end, their efforts went unrewarded as the team failed to complete 75 per cent of the race distance and was therefore listed as not classified in the official results. 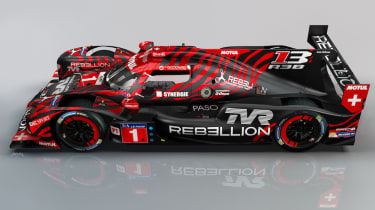 Rebellion will not be using a TVR engine in its Oreca chassis R-13 however, the team having recently signed a deal with Gibson Technology to use its new GL458 V8 engine. This unit is based on the company’s 4.2-litre V8 that has enjoyed plenty of success in LMP2 in recent years and in new 4.5-litre guise the naturally aspirated engine is expected to produce in excess of 750bhp in race trim.

TVR’s decision to return to motorsport is more than a marketing one, explained chairman Les Edgar: “When we resurrected the TVR brand, we knew that we wanted to achieve a return to the race track. Our partnership with Rebellion Racing allows us to achieve that goal, while bringing about valuable operational and technical knowledge, which directly transfers to our road car operation and future racing activities.

> Click here for more on the all-new BMW M8 GTE

“We have a long-standing relationship with Rebellion Racing and have been following them closely in WEC over the last few years. We greatly look forward to working with the team and are confident that Rebellion Racing TVR will see much success during the Super Season.”

Following this weekend’s prologue at Paul Ricard, the 2018-2019 FIA World Endurance Championship Super Season will start with the Spa Six Hours in Belgium on 5 May before heading to Le Mans the following month. Rounds at Silverstone, Fuji and Shanghai will see out the year before the season continues in 2019 with a return to Sebring in March, back to Spa in May and the season finale taking place at Le Mans over the weekend of 15-16 June 2019.