Can’t quite stretch to a One-77? Don’t worry – you could be enjoying a V12-engined Aston Martin for as little as £30k 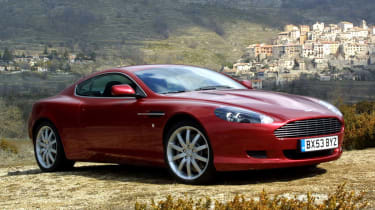 Along with the DB7 Vantage/GT, this is the entry point into V12 Astons. The DB9 was a leap forward in reliability and integrity, though early cars did suffer the odd glitch.

At launch the spec was pretty meagre, but it became well-specced from the 2006MY (satnav, Bluetooth, heated seats, etc). Touchtronic 2 cars with paddles are vastly more popular, but rarer manuals are becoming sought-after. Two-tone interiors add value, as do the ‘Premium’ and 260W Linn audio systems. The Sport Pack is a must for keen drivers, though some find the ride too harsh, so test it on a variety of roads. Buy the newest you can afford, as upgrades were always being introduced (2009MY had worthwhile chassis tweaks).

Early cars are tempting at around £30K but check very carefully for a full history (including service actions) and that there are no electrical issues: door locking, windows, seat controls, rising nav screen, hi-fi – all are expensive to fix. Also check the suspension and transmission for oil leaks. Examine body panels for signs of scrapes and corrosion from stone chips. As with all these V12s, fastidious attention needs to be paid to the oil level. The engine (450bhp on earlier cars, 470bhp later) should be silky, with a step in power at 4000rpm, while Touchtronic should be smooth and responsive on slow-speed take-up.

‘I bought one’ James Edwards - ‘Mine’s an ’05 car. I’ve had it two and a half years, coming from a 360 Spider, and I’m amazed how easy it is to live with. I've done about 8000 miles and apart from fuel – and probably depreciation – it’s been relatively inexpensive. Specialists are best for servicing; the dealer network doesn't seem committed to older cars and Works is a tad too pricey even for my cherished car. Would I buy another? Yes, but a later car with the Sport Pack.’