If you're considering a supercar to attract the opposite sex, this is the one to go for 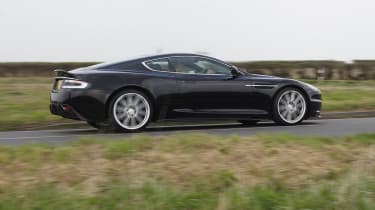 A couple of months ago the Lambo LP640 hit the ramps for a touch of expensive routine maintenance. This month it was the Aston’s turn, but there was a maddening difference in that this wallet-busting episode was entirely avoidable.

More about that in a moment, but first, with the trackday season behind us, I can report that the DBS has been seeing a lot more road use lately. I’m still rather bemused by the sheer volume of positive attention this elegant machine attracts while it’s out and about. Interestingly, by far the most popular question at the pumps doesn’t concern the Aston’s top speed or engine size but – in relatively polite terms – what effect it has on the opposite sex. To answer that, if you’re considering a supercar with this thought uppermost, then you can forget your Lamborghinis and Ferraris – the DBS is the one to go for.

And so to this month’s big bill, one for over £9000, for having the Aston’s ceramic discs replaced prematurely. To cut a long story short, the pad-wear indicator light had appeared on the dash but a visual check suggested there was still plenty of life left in them. At least the ones that could be seen… I hadn’t figured on the inside pads wearing through first and then stripping the silicone coating from the discs, rendering them largely ineffective. ‘Agonisingly frustrating’ doesn’t even begin to describe it.

It’s now been a year since the DBS first hit these pages and, this avoidable problem aside, it has been utterly reliable – impressive stuff given the constant hard punishment it has received. OK, so it’s had the odd squeak and rattle, the driver’s door seal still whistles occasionally and the sat-nav is as dreadful as a Land Rover’s (and that’s saying something), but overall it’s an absolute joy. For a supercar tipping the scales at almost two tons it pedals on too, and firmly ensconced in those superb sports seats it’s supremely comfortable on long journeys.

What I’ve never been able to understand, however, is the stark difference between the DBS and its smaller brother the DB9, which in direct comparison handles like a tug, at least on the track. Back in the DBS, with the Sport button depressed it’s taut through the twisties, with oodles of punch from that wonderful V12. For me, though, it’s the details that count, and if you look closely there’s always something new to enjoy in the DBS’s exquisite carbon bodywork.

In March the big Aston starts a new, even more intensive season as a trackday experience car, so it will definitely be around for some time yet. Should be an interesting year.