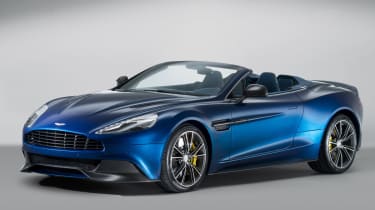 The new Aston Martin Vanquish Volante is the British sports car maker’s latest convertible model. It features the same powertrain and luxury items as the coupe, but with a retractable soft-top roof.

The Volante uses a triple-skin lightweight fabric roof, instead of the folding metal item of some rivals, such as the Ferrari 458 and McLaren 12C Spiders, and it retracts in 14sec at speeds up to 30mph. Once retracted, the roof resides under a tonneau and deck lid. This does not affect boot space, which measures 279 litres, a 50 per cent increase in capacity over the Vanquish cabrio’s predecessor, the Aston DBS Volante.

To account for the Volante’s lack of roof, there are new springs and revised damper settings. The dampers are adaptive items with three settings: Normal, Sport and Track. Braking is handled by carbon ceramic discs from Brembo, and the front callipers are the same as those found on the One-77 hypercar.

The chassis is aluminium, clad with semi-structural carbonfibre body panels in order to keep the mass down to a minimum. As with the coupe, there’s an exposed carbon splitter, side skirts and rear diffuser, Aston Martin going to great lengths to ensure the visible carbon weave flows in one direction.  Despite extensive use of the material, a plethora of luxury items and safety equipment contribute to a stocky 1844kg kerb weight.

The interior is trimmed is a mostly leather and Alcantara affair, while there’s a 1000W Bang & Olufsen 15-speaker audio system. The cabin can be configured as a 2+2, or as a 2+0 for extra luggage capacity.

Aston Martin Vanquish Volante prices start at £199,995 in the UK – up around £9000 compared to the Vanquish coupe, and the most expensive series production Aston – with first deliveries starting later in 2013.