Aston Martin takes the roof off James Bond’s motor. So will he be shaken or stirred? 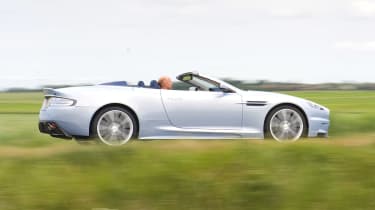 You get big skies out in the Fens. Big skies and tarmac that looks like the farmer forgot to raise his plough when he drove out of the field. We’ve come out here for the former, fearing the  latter, because the fear is that the DBS Volante, being 25 per cent less stiff than its coupe cousin, will bump-steer, twist and launch itself into the nearest dyke.

It doesn’t. Initially its sure-footededness on these raised, vanishing-point causeways comes as a relief, then it begins to earn nods of appreciation for its ability to track straight, soak up punishment and maintain composure. Twenty-five per cent sloppier than the DBS? It doesn’t feel it. There’s barely any windscreen shake and rarely any steering column shudder.

The key to this stiffness, says Aston, is the hard-mounted rear subframe, attached at six points rather than the four of the DB9. But there’s more to this car than a commendably beefy bonded aluminium structure clad with carbon panels – a folding fabric roof for one.

First things first – does it look right? Not when it’s up. As with all convertibles, the abbreviated roofline has resulted in a longer deck and the Volante has lost the rear-end flow that makes the current Astons so beguiling to look at. Extra style-lines have been worked into the (carbon) roof cover and bootlid, but if looking good matters to you, you’ll want to keep the roof down whenever possible. Okay, so some of the DBS’s detailing is a little fussy – glorious 20in diamond-turned wheels excepted – but viewed in isolation this is still a dramatically fine-looking machine.

The hood contains a layer of Thinsulate to reduce noise and boost insulation, which seems to have done the trick, apart from a distracting wind rustle from around the trailing edges of the rear side windows at high speeds. Lowering the roof is simple. Aston speaks of ‘improving the roof choreography’, but that’s just a pretentious way of saying it’s three seconds faster than the DB9’s. One finger and 14 seconds at up to 30mph are the salient points here.

Oh, and 70kg. That’s what the complete roof weighs, contributing to a 115kg total weight gain for the Volante (which, incidentally, means moving with light rapidity. Possibly a touch ironic given the 1810kg kerbweight). Nevertheless Aston still claims the same 4.3 second 0-60mph and 191mph maximum and although the soft top doesn’t feel quite that brisk (chiefly because of its long gearing and the V12’s inertia), it’s still an immensely rapid car. And now a more sonorous one than ever before.

The Fens cannot do the V12 justice – there are no tunnels, barely even a farm building to bounce the rich, enveloping sound waves off. And yet with nothing but fields and sky around, the exhausts still accurately trumpet every engine fluctuation, every baritone gargle, every foray beyond the 4000rpm baffle-opening point, the occasional flatulence when you lift off. Chopping the top may have removed any last vestige of the DBS’s supposed hardcore nature, but it’s also opened up a whole new world of aural entertainment.

And then there’s the exploitable, engaging handling. Aston seems to have hit a rich vein of form recently – just read what Henry’s got to say about the V12 Vantage (page 88) – but what really impresses about the DBS Volante is the crisp, deliberate, precise way it changes direction. Yes, it drives heavily, but the weight is never intimidating, the steering never goes woolly, the damping equilibrium is never upset. It doesn’t sparkle and cause your nerves to go all tingly, but there’s a consistency to its behaviour, the way it settles so happily into a loping stride, the way it anchors itself to the road when you pick up the pace, that’s very satisfying.

We found you tend to use the firmer of the two damper modes most of the time. The comfort setting allows a little too much vertical travel from the back axle, but the sport setting is very well judged, noticeably sharpening up the car’s manners without ever becoming harsh or crashy.

The heavyweight manual shift is a touch ponderous, so we’d opt for the Touchtronic 2 transmission, which, along with the standard rear seats, brings the DBS Volante into the DB9 Volante’s firing line. But that’s what the DBS is – a DB9 for those who care about driving.