When are 380bhp and 302lb ft of torque not enough? When they emanate from an Aston Martin V8 Vantage... 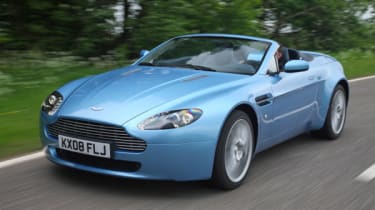 There's a lot to like about the 'small' Aston Martin: its looks, its ultimate pace, the agility that comes from its relative compactness. But the downside of its V8's revvability is a surprising weediness lower down the rev range. Put simply, most of the time you're in one gear lower than you'd expect to be in.

Could this, then, be the cure? Engine capacity has risen from 4.3 to 4.7 litres, with stroke increased more than bore so the dimensions are 'square' rather than oversquare. That in itself is always good for torque because it tends to increase the velocity of the intake air and improve cylinder-filling at lower speeds. There are other detail engine changes, too: pressed-in rather than cast-in cylinder liners, a freer-flowing inlet manifold, modified variability in the inlet cams' timing, slightly larger inlet valves at the far end of re-shaped ports.

All of which results in a power rise to 420bhp at 7000rpm, with torque of 346lb ft at the 5750rpm peak of a plumper curve. And, in the modern idiom, CO2 output is down too, by 15 per cent. At least it is during the artificial operating conditions of official tests.

Chassis settings, too, get subtle changes. The spring rates are 11 per cent stiffer at the front, five per cent at the rear, and the front lower wishbones' bushes have a little less longitudinal compliance. That sounds good for taut handling and potentially ruinous for the ride, but in chassis dynamics things are seldom that simple. The saviour comes in the form of new Bilstein dampers more absorptive of small bumps, so suppleness can co-exist with sharpness. There's a small change in steering geometry, too, to improve response.

There's a revised, DBS-like centre console with clearer switchgear, a less-baffling sat-nav and a new roadwheel design. The sequential Sportshift option has a new cam-type actuator for a faster, quieter shift, and cleverer software is intended to give smoother, cleaner shifts and better traffic manners.

Finally, there's a new Sports Pack option with yet firmer springs, Bilsteins retuned to suit, lighter five-spoke wheels and, for the coupé only, a stiffer rear anti-roll bar. This is a harder-edged Vantage along the lines of the limited-run N400; the next issue of evo will feature this car in the proper enthusiast's likely guise of choice, a manual coupé.

Meanwhile, we've also sampled the revised V8 Vantage at its other extreme, as the Roadster. This is no compromised boulevardier, though; our first Roadster encounter revealed a car of remarkable structural rigidity and little to soften the V8 driving experience bar a touch too much initial understeer in a fast bend. A mark of Aston's confidence in the Roadster's stiffness was that it had slightly {I}firmer{I} springs than the coupé, whereas most open cars are more softly suspended than their closed siblings to help disguise the body shake.

So the new Roadster is more stiffly-sprung again, but there's nothing wrong with its ride and the structure still shows no sign of wobble or shudder. That's impressive. That lack of initial cornering bite has gone, too, and the Roadster feels a touch pointier than before even if the steering is still short on detailed information about what's happening under the tyres.

As for the engine, you get to hear it better in the Roadster and it's quite an inspiring sound if less sonorous and more metallically busy than, say, a Maserati GranTurismo S's tune. Crucially it also fulfils its promise of more musclepower, no longer demanding sky-high revs to complete that tightly-judged overtaking manoeuvre although they're still available if you want them. There's no need to work this engine hard; it now feels natural for the car instead of sometimes overwhelmed by its task. A series of joyous twists is now taken in third or fourth gear instead of hovering near the rev limit in second.

The manual gearbox is still the one to have, though. More's the pity, then, that the great majority of buyers are likely to go for the Sportshift. This now has new software designed to let the transmission tell the engine how to modulate the throttle for a smooth shift, and the Sport setting now sharpens the throttle response as well as speeding the shifts. In automatic mode, it now holds a lower gear when going downhill and tries not to change gear during a corner.

Fine. But it still surges in automatic mode, and even used manually the torque interruptions in upshifts are too abrupt. Sport mode, as ever, is better in both automatic and manual use because the torque interruption is shorter, but a properly-driven manual gearbox will always be smoother. What the V8 Vantage needs is a DSG-type gearbox option, as its Porsche 911 rival is about to offer.

One other thing. The V8 now has a 'key' similar to the DBS's and officially given the same 'emotion control unit' description. Communications director Dave King, however, couldn't bring himself to utter that nonsense and called it a 'dual key', presumably because it both turns on the ignition and starts the engine (as keys usually do). The relief was palpable.