Entry-level Aston isn’t short of performance and drama, while rear-drive handling is big on fun

The new Aston Martin V8 could just be the most important car in the British brand’s long history. Yes we’ve heard this line many times before, but on this occasion it could actually be true. Not only does it replace one of the firm’s most successful models, it’s the first all-new Aston to be seen through from start to finish both by boss Andy Palmer and recently recruited chassis guru and Lotus refugee Matt Becker. It’s also the second Aston Martin to benefit from the increasingly fruitful relationship with Mercedes-AMG, which in this case provides the twin-turbocharged V8 engine and plenty of the electronic hardware.

Given the popularity of the original Vantage, and the fact it still looked fresh after 11 years in production, design chief Marek Reichmann has gone for bold with the exterior styling. It’s best viewed in profile or from the rear three-quarters, where the mix of sharp creases, eye-catching angles and flowing curves really catches the eye. Highlights include the thin LED tail lamps that run the full width of the car and the scalloped door inserts that run from the vents set in the front wings. Less impressive is the front, which looks a little bland despite a gapingly large version of the trademark Aston grille.

> Click here for more on the Aston Martin Vantage

Inside, the Vantage takes a radical departure from its predecessor. Gone are the analogue dials and creaky, outdated infotainment system, to be replaced with bold design and cutting edge kit. There’s a configurable TFT screen ahead of the driver, while the infotainment system is pure Mercedes (as is the single stalk controller for the indicators, wipers and main beam). The rest of the switchgear is scattered across the wide transmission tunnel, including the starter button, which is a similar shape and size to the fan speed controller above it, resulting in the odd fumbling moment as try to start to the car but succeed in only adjusting the air-con.

Overall, the Vantage looks stunning and feels special inside, but it’s worth noting that our early production car wasn’t perfect, with some erratic panel gaps visible through the disguise. 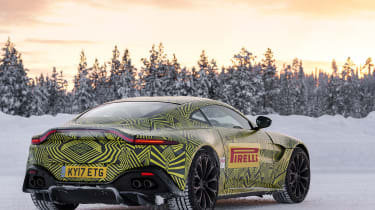 Chassis technology runs to the latest generation of Aston’s Skyhook adaptive dampers, which feature Sport, Sport+ and Track modes. Also included is a limited slip rear differential, although for the first time one of the firm’s cars it’s an electronically controlled until that can run from fully open to 100 percent locked in fraction of a second.

The standard braking system uses mammoth 400mm discs at the front and 360mm items at the rear. A carbon ceramic set-up is likely to be an option, one which owners likely to take their cars on track should consider – although at around 1600kg with fluids the Vantage is hardly a heavyweight.

Under the Vantage’s clamshell bonnet is the same Mercedes-AMG twin-turbo 4.0-litre V8 that debuted recently in the DB11. It’s essentially the ‘hot-vee’ unit that’s also used in the Mercedes-AMG C 63, E 63 and GT. The agreement with Mercedes-AMG means that Aston isn’t allowed to make any internal changes to the unit, but bespoke induction and exhaust systems, plus a remapped ECU, promise to give the engine a unique Aston sound and character. Besides, even in off-the-shelf form the V8’s vital statistics of 503bhp and 505lb ft are hardly to be sniffed at. The latter figure is developed at just 2000rpm, hinting at some real muscle for the rear wheels to cope with, but more on that later.

As you’d expect, the Vantage is a lively performer, with the 0-62mph dash delivered in a claimed 3.7 seconds (over a second faster than the old car), while top speed is a heady 195mph. Crucially, it feels as fast as the numbers suggest. We drove the car for a short time on snow covered roads, so even on suitable tyres it’s no surprise the Aston struggled to put it’s power down, with only very progressive applications of the throttle avoiding the interference of traction control. However, once rolling the Aston gathers speed with real intent, the tidal wave of torque catapulting the car up the road. It’s maybe not as rapidly quick as Porsche 911 Turbo, but it’s not far behind. The tweaks to the ECU have also delivered a more linear delivery, so the despite the breaks in traction it doesn’t feel as if the unit is dumping all its torque on the road in the same way as in an AMG. 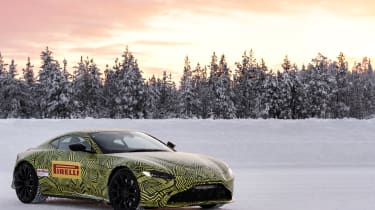 Arguably the best part of the engine is the noise. The changes to induction and exhaust deliver a richer, more cultured soundtrack than the bombastic NASCAR bellow you get with this engine in a Mercedes. There’s a pleasant burble at idle that builds to crackling roar at the redline that’s pure Aston Martin. The noise is all the more remarkable when you consider the oddly small pea-shooter tailpipes.

Okay, it’s full disclaimer time here, because while the car we drove was pretty much production ready, we only got to drive it on snowy Arctic roads.

So with that in mind, what’s it like? Well, for starters it feels big. At 2153mm it’s around 200mm wider than a Porsche 911 Turbo, a fact that is exacerbated by the Vantage’s low-slung driving position, high-set dashboard and slimline windscreen. It doesn’t take long to acclimatize, but once you’re comfortable you can appreciate the steering, which is meatily weighted and naturally geared. It’s not exactly dripping with feedback, but even in these conditions there’s strong front-end bite from the wide front axle. Less tenacious is the rear axle, which in such wintry conditions is allows going to be fighting losing battle for traction. The tweaks to the 4.0-litre have resulted in a more progressive power delivery, but with 505lb ft to contend with the rear tyres quickly give up the fight. Still, with near 50/50 weight distribution and quick steering, the Aston’s line through a bend can be altered at will with a prod of the accelerator pedal – there’s real entertainment to be had here.

Obviously, given the snowy route and winter tyres it was impossible to gauge the ride and refinement, other than to say it feels as firm as you’d expect of a super sportscar. 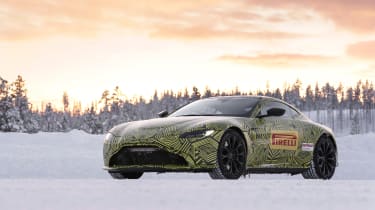