Unique GT12 makes debut at the 2016 Goodwood Festival of Speed 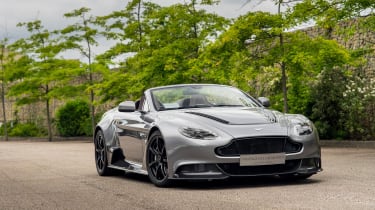 Aston Martin has revealed a one-off Vantage GT12 Roadster at the 2016 Goodwood Festival of Speed.

Based on the formidable GT12 coupe this unique model is a 592bhp, two-seater carbon-fibre bodied roadster, the first to be built by special order for a single customer by the company’s Q by Aston Martin division. 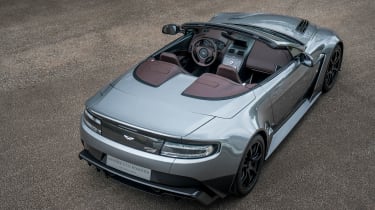 Mechanically the bespoke Roadster is identical to its coupe sibling. The 6-litre normally aspirated V12 engine retains the cast magnesium inlet manifolds and torque tube, while the seven-speed Speedshift III automatic gearbox also featuring the coupe’s lower final drive ratio, limiting the maximum speed to around 180mph, the GT12 coupe will crack a claimed 185mph. Expect a 0-62mph time of 3.7sec, two-tenths slower than the coupe. Under the skin the same lithium-ion battery and titanium exhaust are retained.

The GT12 coupe’s carbon ceramic brakes are carried over, so to are the adaptive dampers, stability control and ABS systems, although all have been reconfigured for the roadster, which weighs in the region of 100kg less than the regular 1665kg Vantage V12 S roadster. 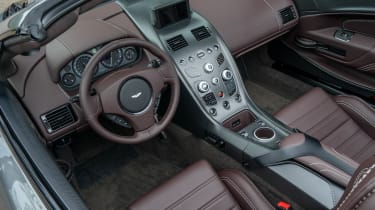 Designed and built in-house, the GT12 Roadster was developed, tested and built by the same team at Q by Aston Martin who were responsible for the Vulcan, Lagonda Taraf and One-77.

Q by Aston Martin recently incorporated Aston Martin Advanced operations, the division responsible for the former projects. The new setup allows customers to work with the company’s engineers to design and develop design and engineering projects.

The new GT12 roadster is not the the first time Aston Martin has built a one-off project for a customer, the CC100 Speedster from 2013 is another example of what the British firm is capable of delivering, no matter how far the client’s imagination stretches. 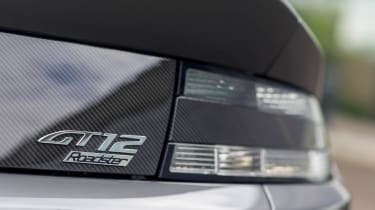 Currently, Aston Martin has no plans to make any further examples of the GT12 Roadster, but its Q division will happily entertain the ideas and wishes of customers wanting a very special Aston Martin.

The cost to build the GT12 Roadster hasn’t been revealed, but considering the GT12 coupe started at £250,000 before options, we can’t imagine the customer for Aston’s most extreme Roadster received much change from double that amount when commissioning their unique car.