There’s another performance luxury SUV to get your head around following the launch of the £105,000 Audi RS Q8 at the LA Motor Show 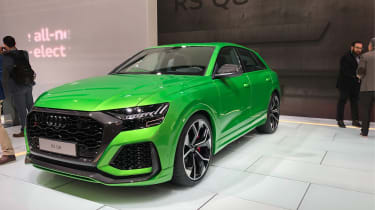 The pinnacle of the Q8 line-up, the RS Q8 takes the running gear of a Porsche Cayenne Turbo/Lamborghini Urus/RS6 Avant and sticks it in Audi’s four-door coupe SUV body, which, front and rear PUs aside, is pretty much a Lamborghini Urus. Or is it the Urus that’s a Q8 in drag…

While Audi Sport claims its hyper-SUV isn’t as extreme as its Italian cousin, the performance numbers suggest otherwise. Some 591bhp and 590lb ft of torque from the same 4-litre, twin-turbocharged V8 are substantial enough numbers to hurl this behemoth along the road at frankly obscene speeds for something so large. Zero to 62mph flashes by in 3.8sec (a tenth quicker than a Carrera GT), and 125mph in 13.7sec. And its delimited top speed of 189mph defies the laws of physics. And sanity.

What we do know is that Audi is claiming to have s completed a 7m 42s lap of the Nurburgring Nordschliefe in the RS Q8, some 5s faster than the unofficial 7m 47s that being widely attributed to the Urus.

There are some ‘green’ credentials to the RSQ8’s powertrain, because it also includes a mild-hybrid system based on a 48V electrical system. At its core is a belt alternator-starter connected to the crankshaft. When the driver lifts off or is braking, up to 12kW of power can be stored in the lithium-ion battery. Lift off at any speed between 34 and 99mph and the drive system will do one of two things depending on the driver mode selected: it will either recuperate energy or allow the engine to coast for up to 40 seconds. In stop-start traffic the car will drive on electric power up to 13mph and utilities the front camera system to restart the engine in anticipation of the traffic flowing once again. 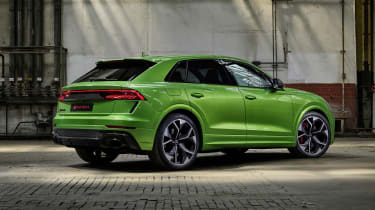 Audi’s quattro permanent all-wheel-drive system is standard along with an eight-speed Tiptronic gearbox, with a mechanical centre differential distributing power and torque 40:60 front to rear. As much as 75 per cent can be directed to the front and 85 per cent to the rear if slip is detected. An optional quattro Sport differential is also available. Standard active torque vectoring works with the wheel-selective torque control system to manage traction, stability and the RSQ8’s dynamics.

Five-link suspension is fitted front and rear with adaptive air suspension and active damping as standard, the latter tuned to an RS-specific spec, and it combines to provide a ride hight variation of 90mm depending on the mode selected. Active anti-roll bars are optional, although these are included with the optional Dynamic Package Plus, which also raises the top speed from 155 to 189mph and adds a quattro sport diff and ceramic brakes.

Audi Drive Select provides the driver modes: Comfort, Auto, Dynamic, Efficiency, All-Road, Off-road and the two configurable RS-specific modes – RS1 and RS2. Both RS modes are accessible via the RS-MODE button on the steering wheel and allow you to play with the engine, gearbox, steering (including the all-wheel steering) and suspension settings, along with the exhaust note.

A set of 22-inch wheels are standard fitment, with 23s optional, which, incidentally, weigh 45kg each with a tyre fitted. That’s 45kg of unsprung mass capable of travelling at 189mph. Madness. The standard composite brakes come with 420mm front discs and ten-piston calipers, with 370mm rotors for the rears. The optional ceramic discs measure 440mm at the front. 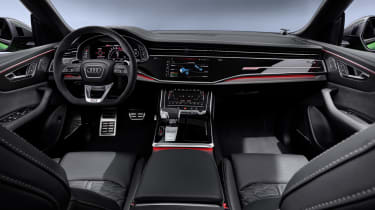 While the body in white for the RS Q8 is untouched from that of a regular SQ8, the fixtures and fittings are unique. These include the single-frame RS-specific and honeycomb radiator grilles, a pair of solid state air inlets and vertical air blades.

Additional width is achieved by fitting wheelarch trim strips, adding 10mm and 5mm front and rear. The side sills, rear diffuser and rear roof spoiler are all bespoke, the last providing downforce across the car’s rear axle at high speed to improve stability.

RS Sport seats and Alcantara highlight the interior as an RS model, as do the special RS displays within the Audi virtual cockpit. RS logos adorn the cabin, from the steering wheel to the kick plates in the sills.

Here are our top 10 current performance SUVs, will the RS Q8 make the list?