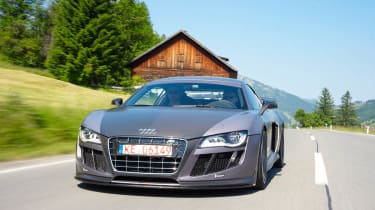 Just how much is too much to spend on an R8? German tuner Abt obviously believes it’s north of £285,000, because that’s the price it has slapped on the windscreen of its GTR version. That’s almost three times the price of the standard V10 R8, or to put it another way, a smidge less than a Ferrari 599 GTO. It had better be special then.

Chances are it will be. Abt is not only the reigning DTM champion, but it also developed its R8 LMS to win the German GT Masters series in the hands of Christian, the raciest member of the Abt family. The GTR is effectively the road version of his race machine. It has 612bhp – an increase of 94bhp over the standard car – and weighs 100kg less.

The severe diet is the result of extensive use of carbonfibre, along with Makrolon (an expensive but strong and light polycarbonate) for the side and engine windows. Inside are a pair of excellent Recaro buckets with a stainless steel roll bar behind, and it’s all finished off with swathes of Alcantara. The detailing and finish is perfect, but then it should be.

The engine fires with more volume, menace and edge than I’ve come across with any other incarnation of this 5.2 V10. The extra thrust has been liberated by nothing more than a remap, an ECU tweak and Abt’s stainless exhaust system. It means that the character and delivery are effectively the same as the regular R8 V10, it just zips through the revs with more venom.

The suspension is adjustable for height, bump and rebound. In Abt’s optimal settings the ride has retained the same everyday useability level, while cornering speeds have climbed massively. Some of that comes from the Michelin Cup tyres, but this car also has astounding stability; you have to be working very hard to unsettle it. It’s more planted to the Autobahn at an indicated 320kph (199mph) than any other car I’ve been in at such speeds, and nailing the ceramic brakes fitted with bespoke Abt pads is like hitting a wall.

Apparently the GTR is the fastest road car to have lapped the Sachsenring, and is only a few seconds off the race car’s time. I don’t doubt the claims. This R8 is as quick across the ground as anything else I’ve ever driven.

In Germany, Abt tuning parts can be bought in main Audi dealerships, and with the firm’s impressive record on the German race scene it has a very high profile in its home market. Eight of the planned 25 GTRs have been sold already. After driving it, I bet none of those buyers feels they’ve paid over the odds.