We’re still yet to see the next-generation 2020 A3, but Audi Sport isn’t wasting any time getting the new RS3 in shape in the meantime 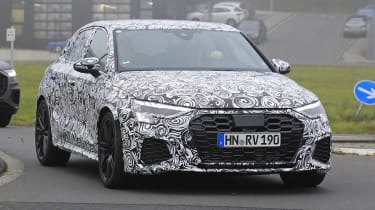 The next-generation Audi RS3 has already been spied, wearing some of the tell-tale elements that will go on to define the next-gen hyper hatchback. Although it’s not unexpected to see that Audi Sport’s smallest hatchback will be reborn, to see a prototype prior to the standard A3’s reveal means we probably won’t have to wait long to see it in the flesh, which is good.

Obvious from the outset are a few key RS design elements giving this prototype’s identity away, such as the open honeycomb grilles and big wheel and tyre package. Typically the RS3 has always featured a wider front axle than standard A3s, and it’s something that we can see here too, although the crude wheelarch extensions are likely to be replaced with a more traditional flared front arch in production.

It’s not just the front that has these RS elements applied though, as the rear bumper hides two oval exhaust outlets and a diffuser-style rear bumper section between. Aside from revealing details of the RS3, it also gives us a good look at the standard A3 that will be revealed before the end of the year, and the sharper, more aggressive styling elements it will feature.

What’s happening underneath the RS3’s skin is less certain, but Audi’s recently revealed RS Q3 might well serve as a preview for the new hot hatchback, as it shares its 394bhp in-line five turbocharged petrol engine with the current RS3 and TT RS models. As such, we expect the RS3 will utilise this same five-cylinder engine, but whether it’ll come with a power bump to usurp the recently revealed Mercedes-AMG A45 S and its class-leading 415bhp power figure remains to be seen. 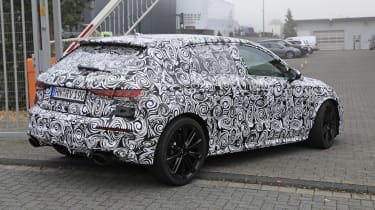 Still, if there is something missing from the current RS3 it certainly isn’t performance, instead we’re hoping that Audi will pay more attention to the somewhat flat and dull driving experience it has never quite shaken. Like the next-generation Golf, the new RS3 will be based on the heavily updated MQB platform, and although the basic technical layout will be largely the same as before, it will give engineers the chance to start over with a bigger toolkit to work from in engineering how the next RS3 will drive. While we’ll have to wait and see whether the RS3 will finally be able to cut it dynamically, the good news is we probably won’t have to wait too long.