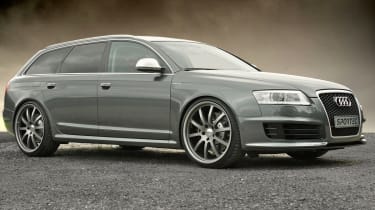 Ever thought 572bhp isn’t enough for a sports estate? Swiss tuner Sportec agrees, and has launched two Audi RS6 conversions to take power to either 650bhp or 700bhp.

First up is the former, stage one conversion, and consists purely of an ECU remap to boost power to 650bhp at 6300rpm and torque to 540lb ft between 2500-4000rpm. 0-62mph drops by a tenth of a second to 4.4sec and the top speed is increased to a limited 190mph. Doubt anyone will find that lacking, though…

The stage two conversion sees the fitment of sports cats on top of the stage one ECU remap. It means the power output rises further to 700bhp at 6200rpm with torque peaking at 584lb ft between 3000-6200rpm. Top speed is unchanged at 190mph, while the 0-62mph drops further to a very supercar-esque 4.2sec.

Stage one and two conversions are available for both Saloon and Avant RS6’s costing £2800 and £6500 respectively (including fitting). Upgrades are available through APS of Brackley who supply and fit the Sportec range in the UK.Click here to see a 572bhp RS6 take on the Audi R8

Read how we got on with our Audi RS6 long termer