After being with us for 12 months and the best part of 30,000 miles, Audi's RS6 had become a much-loved member of the Metcalfe family 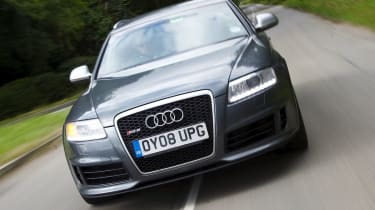 I’ve always preferred estates to saloons, so the mix of an estate body with a monstrous, turbocharged V10 got my attention straight away – as did the pulverising acceleration made possible by that engine. Overtakes were incredibly easy, over almost before the driver of the target car had noticed anything had happened, and the unabated lunge for the horizon became horribly addictive. All that performance was so easily accessible too, thanks to one of the best automatic gearboxes in existence. With the gear selector in Sport, the auto shifts were so well judged that I rarely bothered to change gear manually using the paddles on the back of the steering wheel. Downshifts were accompanied by a perfectly programmed blip of revs, while full-bore upshifts brought a thwack! from the exhaust that sounded almost like an anti-lag device.

But while the RS6 was best defined by the way it accelerated, it wasn’t a one-trick pony – it was genuinely usable too. The sat-nav was a peach for starters, displaying traffic jams and re-routing you accordingly. Then there was the Bluetooth, which was a doddle to set up, and the reception on the (optional) digital TV was as clear as I get at home.

Another screen on the MMI (Audi’s answer to iDrive) allowed the chassis set-up to be changed between three different modes to suit the journey you were undertaking at the time. Sport was almost unbearable on UK roads, so it mostly stayed in Dynamic, although Comfort was the preferred option if I had passengers on board. The Recaro seats deserve a special mention here too, for being both extremely supportive and extremely comfortable, making long journeys a pleasure.

For such a big car, space did look pretty tight when you opened the driver’s door and saw the fat sill and bulging transmission tunnel eating into the footwell and serving as a reminder of all the beefy mechanical bits hidden just behind the bodywork. That said, you soon forgot once you were installed behind the wheel, and, importantly, the load area in the RS6 was simply enormous. We found it could swallow three bikes at once, plus riders, making it almost a match for the family Range Rover in boot bragging rights. But then the RS6 does measure 5 metres in length, which is some 200mm longer than a Porsche Cayenne, for example.

So if the current RS6 is big, easy to live with and stupidly fast, why hasn’t it sold as well as the previous generation RS6 did? I think it’s partly down to timing. With hindsight, the middle of 2008 was not the best time to launch a 572bhp, 18mpg über estate costing close to £80K. Early press reports didn’t help either, as most reported that it was overweight and not much fun to drive. But after living with one for a year I have to disagree. The only time the weight made itself felt was when really pressing on, when braking sometimes took slightly longer than expected. As for the dynamics, well, of the few RS6 owners I know, two have an Enzo parked alongside in the garage, another a Maserati Birdcage, and a fourth has his own race circuit, so perhaps RS6 buyers aren’t looking for ultimate driving thrills from their Audi, just a discreet way to travel very, very quickly, and for that the RS6 is brilliant. Way better than the M5 estate, for example, which is handicapped by its dreadful gearbox and torque-light V10.

Today you can pick up a new RS6 for around £65K, as Audi recently released a number of unsold cars onto the market. Unfortunately this killed residuals in the process, but at least the running costs were much lower than I expected. OK, fuel consumption never rose much above 20mpg on a run, but the service intervals were lengthy and tyres lasted for over 16,000 miles. Pity that the paint had started to flake off three of the wheels by the time the car left us, as otherwise the build quality was impossible to fault too.

Overall, then, the RS6 was a fantastic family express, one I would happily have run until the wheels dropped off, though it would probably be me who expired first! It’s going to take some car to fill its place.