German tuning house turns the diesel-powered S4 up a notch 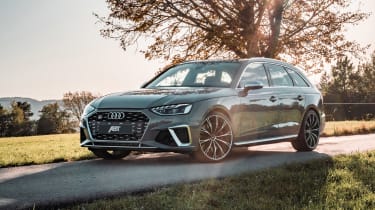 Audi’s new diesel-powered S range hasn’t even been around for a year yet, but tuners have already managed to turn it up a notch for those yearning for more power and a different look. Germany-based Abt Sportsline has turned its hand to the latest Audi S4, upping power and fettling aesthetics to help it stand apart from standard examples.

Abt is no stranger to Audi products, having taken a handful of RS cars to levels no sane person deems necessary, even unveiling its take on the latest RS5 alongside a 788bhp boat complete with dual V8 TDI engines.

In this instance, the tuner has equipped the S4 with its very own engine control unit, helping the hybrid-assistive 3-litre V6 TDI power plant reach 378bhp and a tarmac-tearing 560lb ft of torque, up 34bhp and 44lb ft over standard. Though these aren’t enormous gains, they shave two-tenths off the standard car’s 0-62mph sprint, bringing the number down to 4.7sec, matching the claimed time for the previous B8-generation RS4.

Aside from the performance upgrades under the bonnet, Abt also includes subtle tweaks to the appearance of the estate, lowering ride height by up to 40mm both front and rear with new suspension springs, and including 20-inch Abt Sport GR wheels, in either diamond-cut, or matte black finishes.

Not only do the new springs up the aggression factor, they’re also claimed to improve handling characteristics, helped along by the Abt (optional) sports anti-roll bar.

Pricing and availability for the fettled S4 can be had upon request.