Bentley Bentayga Speed review: how does the world’s fastest SUV work on track? 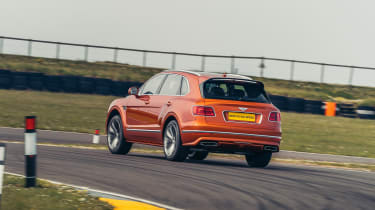 Having loaned the title of world’s fastest SUV to in-house rival Lamborghini and its Urus, Bentley is reclaiming the gong by introducing the Bentayga Speed. Based on the already-rapid Bentayga W12, the Speed model adds a little more power, revised suspension settings and some unique design elements to create a flagship for the SUV model range.

Mixing the usual lofty standards of Bentley luxury with even more performance, the Bentayga Speed is competing with high end rivals such as the Rolls Royce Cullinan, as well as competitors closer to home such as the Porsche Cayenne Turbo S and Lamborghini Urus, although none of those alternatives offer quite the same balance of luxury, comfort, performance and price.

The Bentayga Speed begins life with the same 6.0-litre, twin-turbo W12 engine as the standard car, but revised engine software liberates an additional 26bhp, taking the total to a significant 626bhp. The torque figure remains unchanged at 664 lb.ft, but the torque spread is improved, with the maximum available from lower in the rev range and plateauing for longer. 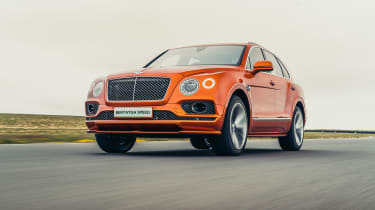 To back up the increased performance, revisions to the exhaust system provide a more vocal sound when the Sport drive mode is engaged. The gearbox is the same eight-speed unit from the regular W12 Bentayga, but this also benefits from a new shift programme when the most-aggressive Sport mode is selected.

The Speed’s W12 unit dominates the car’s character, providing seemingly-infinite and fuss-free acceleration from the slightest squeeze of the accelerator, yet is smooth and unobtrusive in the softer drive modes. Engaging Sport allows more of the 12-cylinder character to come through as well as providing sharper response, and this more aggressive mode suits the Speed’s personality.

A modest power increase and a broader spread of torque seems like a minor change for a new model, but the results are emphatic. Despite having to haul 2.7 tonnes, the revised 6.0-litre W12 cuts the Bentayga’s 0-62mph time to 3.9 seconds, a small 0.2sec improvement over the standard car but impressively beneath the psychological four second barrier. The top speed also inches upwards, touching 190mph.

The starting point for the Speed is the Bentayga W12’s air suspension set up, complete with the 48v active roll system it also shares with Audi’s SQ7. The key change is again reserved for the Sport setting of the four driving modes, with damper stiffness increased by approximately 15 per cent front and rear, while the operation of the active roll control has been adjusted to provide more front-end grip. Ceramic brakes remain on the options list. 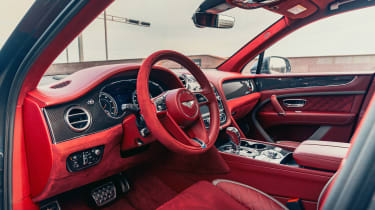 Alongside the performance tweaks the Bentayga Speed receives a handful of visual upgrades, with dark chrome exterior elements, side skirts and a chunky rear wing on top of the tailgate. Inside the Speed gets Alcantara trim, contrasting stitching and a smattering of Speed badges, including illuminated tread plates. With a broad array of personalisation options before you even get to bespoke choices, there’s huge scope for creating the perfect cabin, and with the fit and finish you’d expect from something at this price point, the Bentayga Speed’s cabin is a wonderful place to be.

It’s a notable improvement over the regular W12, although ultimately the size and mass of the Bentayga has the last word. Driven with at least some restraint, the endless thrust from the 6.0-litre engine chomps through the multiple straights of Anglesey, to the point where it barely feels into its stride.

The Bentayga Speed’s ability to lunge forward regardless of engine revs or current speed is both emphatic and addictive. With the eight-speed automatic transmission seamlessly shifting gears and the security of four-wheel-drive, it provides performance that can be used almost regardless of conditions and with very little drive effort. 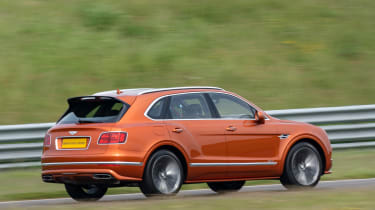 The carbon ceramic brakes have a lot of work to do, not only delivering the required stopping power but also torque vectoring duties. Despite this the braking power remains consistent over several hard laps.

Slower speed corners are where the mass gets in the way with understeer being the inevitable result, although committed late braking helps keep lots of weight over the nose on turn in. Medium and higher-speed turns show the Bentayga’s balance in a better light, with body roll kept in reasonable check and a useful amount of mid-corner adjustability. The enhanced Sport mode certainly helps but it is a bonus rather than being transformative.

The Speed starts at £182,200, compared to £162,700 for the regular W12, but with a modest option spend easily reaching five figures there are few buyers who will find the quicker car too much of a financial stretch.

In comparison, Lamborghini’s Urus squeezes under £160,000 before options, and while it can’t match the performance or status of the Bentley, Audi’s SQ7 is half the price. Although it has much less of a performance car outlook, the Rolls Royce Cullinan is the only rival with comparable luxury but is the best part of £100,000 more.

Bentley is yet to quote an official NEDC consumption figure for the Speed, but with the same weight and a fraction more power than the regular Bentayga it is unlikely to improve on that car’s 21.6mpg combined and 296g/km of CO2. While fuel consumption might be less of an issue for anyone consider a Bentayga Speed, range may be more of an issue, with anything over 300 miles being a bonus.