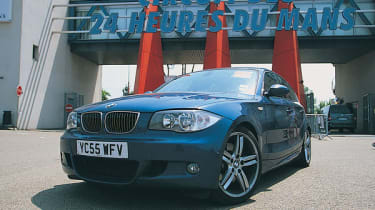 The 130 is a great car to live with - as long as there’s only two of you. Once you have to start folding yourself in and out of the rear seats it becomes a bit of a pain. So why, you might ask, did I invite two friends to join me on the trip to Le Mans? Simple. Because I’d be in the front, and the 130 makes more than enough noise to drown out the complaints from the rear!

Yet standing on my drive, watching my friends unload bag after bag from their car, the 130 seemed to be shrinking rapidly. After a few minutes of strategic packing we sorted it, though, and we were on our way.

With its time at evo coming to an end, I saw this trip as an opportunity to stretch the little M’s legs one last time. Firing up the engine to roll off the ferry at Boulogne, surrounded by Brits in everything from MG Midgets to Noble M12s - not to mention our own small convoy of multi-talented machinery - the understated 130 still felt like a special place to be, a little blip of the throttle within the confines of the ferry reminding everyone that this was no bodykitted 116. However, once out on the open road, running behind the Mustang, we might as well have been in a lesser 1-series. The 130 may be good for keeping a low profile, but if you want to grab people’s attention, this is not the car for you.

This was my first visit to the Circuit de la Sarthe, and having heard as many great tales about the journey as the weekend itself, excitement was building. We chose to snub the péages on the way down, favouring the traditional N138 route instead. The eclectic mix of traffic, from fast moving Le Mans goers to dawdling caravanners, made for erratic progress on this sweeping single-lane road. The 130’s ample torque certainly came in handy here, enabling us to dispatch chunks of slow-moving traffic and edging us ever closer to three-figure speeds. It’s a habit that clearly doesn’t go unnoticed by the gendarmes, though. Sure enough, the further south we went, the greater the frequency of speed-trap sightings. Thankfully the French hate them as much as we do, so by taking note of the helpful flashing headlamps coming towards us, and by overtaking in Catchpole’s wake, we managed to stay out of trouble.

Having had an eventful journey on the way there, we decided to hit the péages on the way back. The 130 revelled in the smooth surfaces, making the long journey home feel very easy, our tranquil cruise only really being interrupted by my brother’s complaints about péage costs, and the occasional ticking-off from the gendarmes. But it’s thanks to those lovely garçons dans le bleu keeping speeds down that the 130 nearly averaged 30mpg for the trip. At least they’re good for something.