A superb drive, but £31K's an awful lot of money, regardless of how well it goes, looks and feels 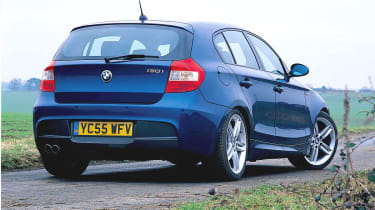 It’s been a relatively short stay for the 130, but it was around long enough to get deep beneath my skin. I’ve always been a lover of everything BMW, and I’d fallen for the 130i M Sport on our eCoty 2005 test (087). In fact I was looking forward to borrowing our soon-to-arrive long-termer from its lucky new keeper at Evo Towers. So you can imagine how I felt when I saw the keys heading in my direction…

Sonorous straight-six up front, drive to the rear, a sharp interior and an exterior so contemporary it could only be the work of the controversial Mr Bangle. Perfect. However, those looks weren’t to everyone’s taste – it was always the first thing people would comment on. I have to admit to not being sure myself at first, but as time went on, the sharply cut creases and subtly carved surfaces won me over, with just a little help from the M Sport body addenda, 18in wheels and aggressive stance.

YC55’s first test was to join the rest of the Fast Fleet on our annual works outing. The venue was a very wet Herefordshire, which immediately highlighted a weakness with the 130: on damp, muddy roads, rear grip was a real problem. Attempting to follow virtually any other Fleeter saw me falling back in a flurry of wheelspin, but if you could deal with the dents to your pride, it was still a pretty fun way of getting somewhere.

The traction control was a must in such conditions, but fully engaged it really interrupted progress, making any journey a frustratingly disjointed experience. Fortunately, BMW’s clever multi-layered system allows you to choose a setting between anxious nanny and nothing, and, once selected, things immediately became more fluid, the system allowing some oversteer to play with while still being there in the background ready to catch you should you run out of talent.

The next big challenges for YC55 were a couple of days on track. Out on the road, the overly stiff set-up of the 130 seemed to accentuate the jiggly ride you get from current BMWs, but once on the faultless tarmac of a race track it suddenly felt more at home. The beautifully weighted controls offered all the feel and feedback you could need, and with a little provocation any degree of slip angle was attainable. However, the lack of a slippy diff became more and more noticeable with each lap. Glancing behind in the tighter turns revealed a telltale trail of tyre smoke from the inside rear wheel spinning up manically. It’s a sad omission from the spec sheet of what would otherwise have been a proper baby M car. However, when concentrating on carrying speed rather than sliding, the 130 really delivered. On Snetterton’s twists and turns I had no trouble mixing it with all but the most hardcore trackday machines, few of which would question the 130’s M credentials, having had to get out of its way at some point!

As a day-to-day tool, the 130 was hard to fault. Alright, it was a bit cramped and bumpy for anyone in the back, but up-front all was well. The tactile interior exuded understated chic, helped by the addition of iDrive, which hid most of the unsightly controls somewhere on the retractable screen. The only real negative was the way it stuttered through its menus for the MP3 CD player, occasionally causing iDrive to crash altogether.

The electric leather seats were wonderful, although at £965 they were maybe a luxury too far. Then again, omitting them wouldn’t have made much of a dent in the £31K price of this car, which is an awful lot of money for a very cosy mid-sized hatch, regardless of how well it goes, looks or feels. A weekend swap with Henry’s Golf made me question if it was actually £11K better than the GTI. The trade-in value was a bit of a shock, too.

YC55’s final task was to ferry me and two mates to Le Mans, a challenge it just about managed, although we were much closer to needing a roof-rack than I’d usually like to get. Behind the wheel, though, it was just as good as it had been nine months earlier: fast, understated, well-built and reliable. The blast through France also reminded me of this car’s best feature: that free-revving, lightweight straight-six – the heart of this very attractive package. As far as hot hatches go I can’t think of anything I’d rather drive, but if I was having to pay for it, maybe I’d think again.