BMW has announced that the startling Vision Efficient Dynamics will go into production in 2013. 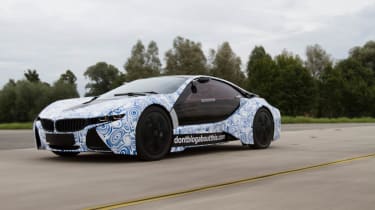 BMW has announced that the Vision EfficientDynamics 2+2 supercar that was unveiled last year as a concept will now go into production to be ready for sale in 2013, complete with its diesel/electric hybrid powerplant.   With styling that rivals the Jaguar C-X75 for shock value, it comes with a powerplant almost as radical. The 1.5- litre three-cylinder common rail turbo diesel engine it is fitted with has a dual role, for as well as the usual power production (161bhp on the rear wheels) it will also act as a generator for the two 110bhp brushless electric motors up front and the smaller, 52bhp version at the rear. These motors can be used together or separately, but combined they produce 328bhp, enough for a 0-62mph time of 4.8 seconds, while still returning economy figures of 75.1mpg and a CO2 emission rating of just 99 g/km.   No question the Vision ED is cutting edge, it’s not going to be cheap and it’s likely that the car will change as the design evolves over the next 36 months, particularly as there will be a new production process to develop and regulations to meet – not to mention the continual development of the technology. But if it can retain the majority of the current features it will be the most jaw-dropping BMW we have ever seen.