Here's another selection of shots of BMW's famous 'Art Cars' during their recent exhibition in Shoreditch, London 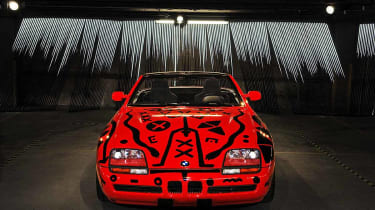 We've already brought you some images of BMW's Art Car collection that was shown in Shoreditch, London - but here's a stunning new collection of shots that have been taken by Nicholas Froome.

BMW commissioned the first 'Art Car' in 1975, when Alexander Calder was commissioned to design a livery for the BMW 3-litre CSL that was racing in Le Mans. The idea proved to be such a hit that it's continued ever since, with artists including Andy Warhol to David Hockney using various of BMW's road and race cars as their canvases.

The art car collection came to the Great Eastern carpark in Shoreditch to celebrate the company's tie-in with the Olympic games. Here are five of Nicholas Froome's images, you can see the rest on the Bolide website