BMW teases i8 Spyder with 'Vision Car' concept at CES 2016 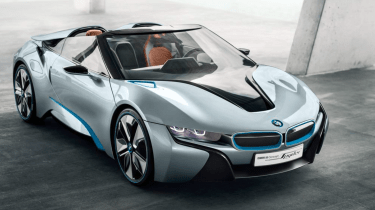 BMW has posted an image of its 'Vision Car' concept set to be unveiled at the 2016 Consumer Electronics Show in Las Vegas. The concept previews future BMW in-car user interfaces and takes advantage of the new 'AirTouch' system found in the latest BMW 7 Series.

The technology allows the driver to interact with the nav-system via hand gestures, allowing control without actually touching a screen or dial. The Vision Car concept is set to take the idea one step further.

>Read all about the 7 Series tech here

The i8 Spyder concept actually was unveiled two years before the i8 coupe went on sale, with BMW displaying it at the 2012 Beijing motor show. You can expect whatever version of the concept shown at CES to be fairly different to that which was unveiled at Beijing, with the three year gap no doubt allowing for major design changes. 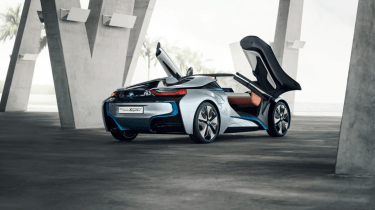 CES isn't like a conventional car show and is instead geared towards consumer technology trends, although of late automotive manufacturers have frequently used it to demo technological innovations. As such, expect the i8 Spyder concept to act as a showcase for tech improvements likely to be made over the i8 coupe, many of which will no doubt leverage tech hardware from the newly launched 7 Series.

The launch of the Spyder could very well bring with it a facelift for the i8 coupe, as well as potential power and battery upgrades. BMW is understood to be considering powertrain changes for the car, so perhaps an announcement will follow on from CES.

Also expected to appear at CES is the next generation Audi A8, albeit in autonomous driving concept form.

Note the images used in this article are from the i8 Spyder concept BMW unveiled in 2012, we will have fresh images of the new car once they're available.