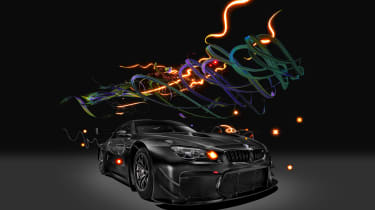 BMW has just released details of its latest Art Car commission. Created by Chinese contemporary artist Cao Fei, this is the 18th official BMW Art Car and the first to embrace 'digital artistry'.

Using the current M6 GT3 race car as a base, Cao Fei has maintained a carbon black finish on the car itself and instead utilised her preferred medium of digital augmented reality and film to produce her art.

> Click here for our evo Supertest between some high performance coupes

Constructed digitally, Cao Fei’s work is meant to be a reflection of the speed of change in China. Typical of her style, the colourful streams of light that make up the medium exist in a ‘parallel world’, only accessible through an app that can be downloaded to your device.

Like previous Art Cars created on a race car ‘canvas’, the M6 GT3 will be driven in competition at the FIA GT World Cup series later this month in Macau.

The BMW Art Car was a term first used in 1975 by French racing driver and auctioneer Hervé Poulain when he commissioned his friend and artist Alexander Calder to use his 1975 BMW 3.0 CSL racing car as a canvas for a piece of art. When the car was then raced at the 1975 24 Hours of Le Mans, the positive press accumulated inspired BMW to commission further Art Cars, bringing together the very disparate worlds of art and motor racing.

The practice of commissioning Art Cars has continued since then, attracting some of the most influential contemporary artists such as Andy Warhol and David Hockney. In recent years, BMW has commissioned two M6 GT-based works by John Baldessari and most recently, Cao Fei who created the car above by exploring new techniques and mediums over and above the car being just a physical ‘canvas’.

Below are some of our favourite BMW Art Cars from over the years. 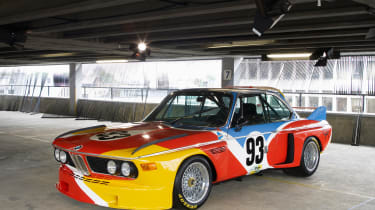 As discussed above, Alexander Calder’s 3.0 CSL racing car was commissioned by French racing driver and auctioneer Hervé Poulain. Born in 1898, Calder was best known for his work in sculpture, creating works that were in part a reflection of America’s post-WW2 prosperity.

Calder’s bold use of block colours on the race car quickly gathered popularity within both the art and motorsport communities, bringing the two together in this unusual cross-cultural format. 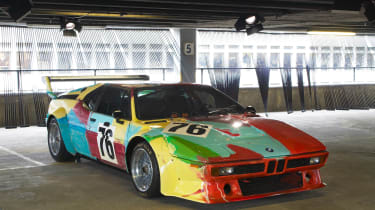 Andy Warhol might be more associated with aluminium when it's in the form of a Campbells soup can, but the iconic American pop artist painted his own BMW Art Car. The Group 4 BMW M1 racing car was painted by the artist himself who declared, “I love that car. It has turned out better than the artwork.”

Raced only once by Hervé Poulain, Marcel Mignot and Manfred Winkelhock at the 1979 24 Hours of Le Mans, the car finished second in class and sixth overall. Thanks in part to the quick nature of Warhol’s painting style, bystanders were apparently able to see the paint stripping off the car during the race. 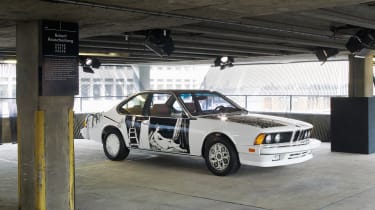 Another famous artist with deep ties in the world of pop art, Robert Rauschenberg differed from his precedcessors by incorporating his own specific style of photographic collage on his BMW Art Car.

Utilising other artists work as well as his own, Rauschenberg took elements like photographs of antique plates and nature scenes to point towards the inherent ecological issues surrounding cars. Unlike previous Art Cars, the Rauschenberg 635 CSi was never destined to race, instead purely being a to be a static exhibition piece. 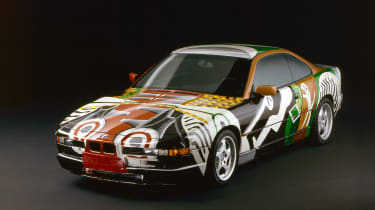 One of Britain’s most loved and iconic artists, David Hockney and his pop art style was applied to a BMW 8-series coupe in 1995. Commenting on the process, Hockney said “I thought it would be a good idea to show the car as if one could see inside.”

As a result, Hockney painted a combination of stylised technical components as well as the cars occupants, including the driver and a dachshund sitting on the back seat. Like Rauschenberg’s car, this 850 CSi road car never ventured onto the road, created soley as an exibit piece. 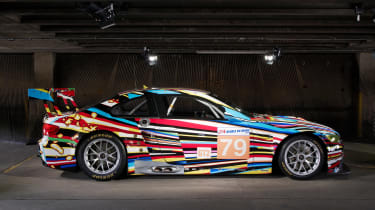 Contemporary sculpture artist Jeff Koons drew upon the energy created by his canvas in the inspiration of his 2010 BMW Art Car. Usually working in the medium of sculpture, Koons was intent on making the M3 GT2 look like it was moving even when standing still.

After making its debut at the Centre Pompidou in Paris, the car competed in the 2010 24 Hours of Le Mans, driven by Andy Priaulx, Dirk Müller and Dirk Werner eventually retiring with technical issues after five hours of racing.