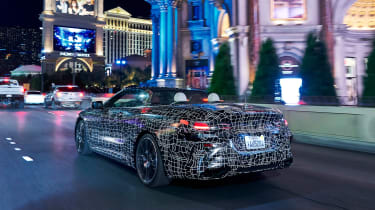 BMW’s new 8-series Coupe will soon be joined by a luxurious convertible version designed to rival the Mercedes-Benz S-class and Bentley Continental GTC, as confirmed by a set of new images released by BMW of a prototype undergoing testing. As the 8-series coupe has now been revealed in full, we have a much clearer idea of what to expect with this new convertible, including what we’ll find under the bonnet.

Arriving early next year, the 8-series Convertible is likely to include the same engine range as the Coupe, including an entry-level 840d featuring a 315bhp inline-six turbodiesel and the flagship (for now) M850i V8 petrol. As in the coupe, the M850i uses a new 4.4-litre twin-turbocharged V8 producing up to 523bhp. A more potent M8 Cabrio is also on its way, and should share the even more powerful twin-turbo V8 from the M5 with around 600bhp.

> Click here for more on the upcoming BMW 8-series Coupe

We expect to see the same broad spread of new tech under the cabrio’s sleek bodywork, including BMW’s active integral steering - or rear-wheel steering to you and me - an active anti-roll stabilisation system, and the latest suite of BMW’s iDrive infotainment and user interface elements. 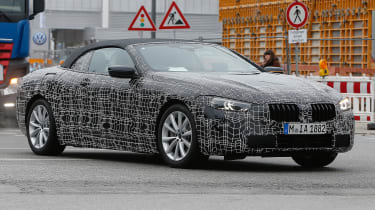 Although it’s not designed to be an out-and-out sports car, the 8-series’ more focused dynamic makeup should make it a more engaging GT compared to the laid-back Mercedes S-class Convertible, if not on the level of more exotic rivals like the Aston Martin DB11 Volante. But with the M850i Coupe also now topping out at more than £100k, the even-more-expensive convertible will not be too far away from the asking price of these rivals either.

A third Gran Coupe derivative will also join the range in time, as will the aforementioned M8 models, rivalling both traditional options like the Mercedes CLS, and new ones like the Mercedes-AMG GT 4-door. We expect that the cabrio will break cover later this year, before going on sale in early 2019.