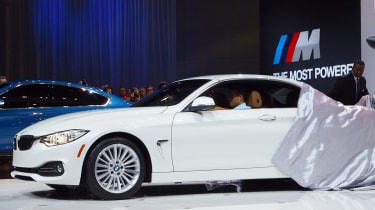 The BMW 4-series convertible has made its debut at the 2013 Los Angeles motor show.

Like the previous 3-series Convertible, which this 4-series replaces, BMW has stuck with a folding metal hard-top, which can be retracted in 20 seconds, though in a move that makes it appear dated alongside cabriolet rivals, the roof can only be opened or closed below 9mph. BMW says the roof is fitted with an extra layer of ‘noise absorbing’ material to help improve noise insulation.

From launch, three engines will be offered. Two petrol options are the four-cylinder turbo 428i and straight six turbo 435i, while the first diesel option will be the efficient and fleet-friendly 420d. All come with a six-speed manual gearbox as standard, with an eight-speed automatic optional. Every model features a start-stop system as standard.

Specifications and trim levels remain mostly the same as the 4-series Coupe models, with the biggest difference being the weight. Almost 300kg is added thanks to the usual chassis strengthening and that hefty folding metal roof mechanism.

The 4-series Convertible is 26mm longer than its predecessor, at 4638mm, though the wheelbase grows by 50mm, improving interior space as well as dynamics. Track widths are up too.

Performance for the 435i Convertible, which puts out 302bhp and 295lb ft of torque, is a little behind the Coupe. The electronically limited 155mph top speed remains, but the 0-60 time suffers slightly at 5.6sec – up from the equivalent Coupe’s time of 5.1sec.

Whether we see a BMW M4 Convertible is as yet unconfirmed, but the German firm’s continued niche exploration means one is likely to appear, as well as an M4 Gran Coupe when the four-door 4-series appears further down the line.