Like the look of the BMW i8 but not got the cash? Hungarian design studio has a fix. Sort of... 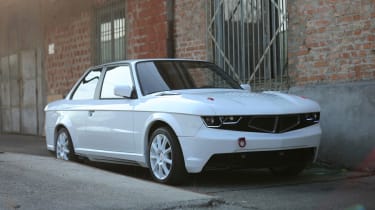 The BMW E30 3-series has been modernised by a Hungarian design studio. The modernisation of classics appears to be one of the areas of the car industry flourishing right now – see the Eagle E-type and new DB5-esque David Brown Speedback GT for examples – and it would seem even affordable cars aren’t alien to the treatment, either.

TMCars is a Hungarian company with a handful of quirky supercars and concepts on its CV, but this TM Concept30 is its most attainable and down-to-earth project yet.

The styling package was first shown in 2012, to mark the 30th anniversary of the E30, and it’s now on sale. Suitable for two-door hard-tops, there are both road and track biased versions, TMCars noting the popularity of old Beemers for track toys and cheap racecars.

The kit is made up of bumpers, fenders, sills, door panels and a new boot lid, and the parts either bolt into the existing fittings, or they’re fitted on top of standard parts. As a result, the Concept30’s silhouette is just like the E30’s, but there are notably modern touches; the front end houses bi-halogen headlights and a more aggressive kidney grille, with shades of BMW i8 about the design. The side profile possesses more prominent wheel arches and concealed door handles while at the rear, there’s an intricate (some may say fussy) taillight design and a boldly sculptured rear spoiler.

Constructed of plastic composite, the bodykit comes to 2970 euros excluding tax (£2500, or £3000 including VAT). The headlights are an additional cost, weighing in at 800 euros excluding tax (£660 or £780 including VAT). With E30 coupe prices on the rise, it’s not going to be a cheap project, but it’s fair to say it would be a standout car at a typical track evening.

The prices don’t include fitting, though TMCars say it’s a relatively easy job for owners to complete themselves, one that ought to take two to three days. There are no mechanical changes.