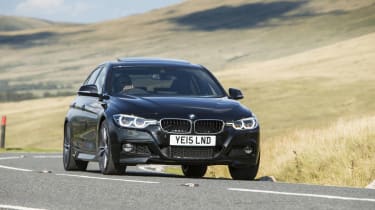 Love it or loathe it, the BMW 3-Series is still the compact executive saloon to beat. While others have got close – notably Mercedes-Benz with its C-Class and Jaguar with the new XE – BMW’s ability to build a car that appeals to the keen driver still leads.

The latest model is now on sale, and features a series of small revisions over the previous car to ensure it keeps pace with rivals.

It starts with subtle changes to the styling. Revised headlights define the front end, with fully-LED headlights available as an option. They’re further apart than before, visually widening the front end, and cars with standard headlights now get LED daytime running lights strips for further visual definition.

There are broader side intakes at the front, while BMW’s active cruise control radar sensor is now better integrated into the lower air intake. At the back, the rear light units are now fully LED with a refreshed design.

On the 340i – the black M Sport-kitted car in the photographs – there are 80mm tailpipes to the left and right hand sides of the rear bumper. 320i and 320d models and above get dual 70mm tailpipes to one side, and models below this get a single 75mm tailpipe.

Styling can of course be tweaked depending on the model line chosen. Sport and Luxury lines divide the range down the middle, while M Sport – with standard leather, an styling kit, sport suspension and sports seats – takes the car another step towards full BMW Motorsport products, at least visually. 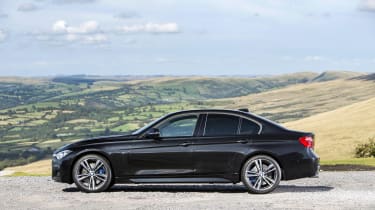 Revised engines ensure the entire range is now Euro 6 emissions-compliant. As before, all engines are turbocharged, while anti-friction bearings on the diesel 320d improve throttle response and reduce fuel consumption during the warm-up phase.

A new 318i model kicks off the range, displacing the old 316i, producing 134bhp from its 1.5-litre, three-cylinder powerplant – similar to that found in the Mini Cooper. BMW says vibration levels are low, likening the unit to the company’s six-cylinder units.

Performance is perfectly reasonable for an entry-level model, with an 8.9sec 0-62mph time and 130mph top speed, with the six-speed manual. Combined economy of 54.3mpg in saloon form also makes it frugal.

With two more cylinders, the 340i offers even greater performance. Maximum power of 322bhp and torque of 332lb ft is sent through a standard eight-speed automatic transmission – with a 0-62mph sprint of 5.1 seconds the result. 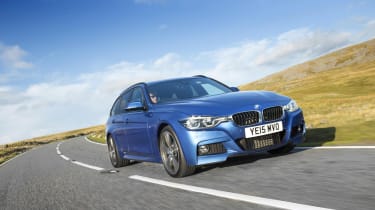 A choice of six-speed manual or eight-speed automatic transmissions is offered across the range, depending on the model. The automatic features reduced torque converter slip for improved economy and response, while the manual features a function that rev-matches whether moving up or down the gearbox, smoothing out the driver’s shifts.

Adding further options to the drivetrain list is a choice of a traditional rear-wheel drive setup, or xDrive all-wheel drive. The 320i, 320d and 330d can all be optioned with this setup, while the 335d features it as standard.

Small revisions to the suspension should further refine the drive, with a slightly stiffer setup, new dampers and bump stops, thicker strut top mounts, thicker anti-roll bars and in rear-wheel drive models, a 10mm reduction in ride height on cars with adaptive damping.

evo will be driving the new BMW 3-Series soon, so keep your eyes on evo.co.uk for a comprehensive review.