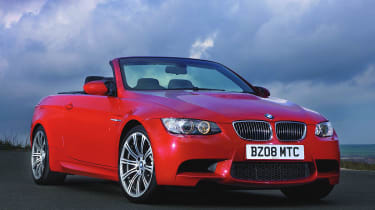 It’s perhaps foolish to do so, but it’s still hard not to think of the M3 in purist terms. Hard not to put it on a pedestal as the ultimate, road-going embodiment of everything that’s best about BMW at its least distracted: performance, driver involvement, dynamic focus. No boutique baggage, no blurring of purpose, just pure, unadulterated driving enjoyment. After all, the original M3, the E30, had a motorsport career that saw it become one of the most successful Touring Cars of all time.

But we’re a long, long way from there with this, the latest recipient of the iconic M3 badge. The years have softened the focus and broadened the repertoire as BMW has chased sales rather than podium finishes. Today, ‘M’ has more mainstream connotations and some feel that although the E92, with its sensational 414bhp 4-litre V8, is easily the quickest M3 ever, it’s also the one that’s moved farthest away from the lean acuity of the original.

That being the case, it’s much easier to accept and like the inevitable convertible, especially now that it has a folding hard-top. But it’s still clever of BMW to deflect attention away from the structural compromises and extra weight involved by choosing the convertible as the launch pad for its new seven-speed M DCT double-clutch semi-automatic transmission, now being offered as a £2590 alternative to the standard six-speed manual ’box.

After the thumpiness of the old SMG single-clutch paddle-shift system, M DCT is something of a revelation, capable of offering the kind of smooth, all-but-seamless progression from one ratio to the next that SMG operatives could only dream about. Getting the double-clutch assemblies to work successfully with a longitudinally mounted engine capable of 8400rpm wasn’t the work of a minute either, according to M Sport’s engineers.

Yet there are still some foibles. Unless you press the ‘Power’ button on the transmission tunnel – which sharpens the response of the fly-by-wire throttle – moving off from rest demands a surprisingly big push on the accelerator and seems to be accompanied by a lot of clutch slip. And there’s an element of clunkiness in stop-start conditions you simply don’t get with a torque-converter auto. Once moving, though, M DCT has a fine repertoire of tricks and, to a large extent, you call the shots by selecting the shift-speed. As with SMG before, choices range from a lazee-boy 1 to a whip-crack 6. In self-shifting auto mode with the shift speed on a modest setting, it’s hard to imagine needing anything more – the transmission shifts sweetly, swiftly and responsively, effortlessly tapping the mighty V8’s ample torque. But select ‘Sport’, dial-up 6 and start using the paddles, and some of the visceral violence associated with SMG returns, albeit minus the jarring thump.

With the top down, this can be an intoxicating experience, as the M3’s V8 – a wonderfully vocal performer even within the confines of the tin-tops – at last gives an open-air concert. And it helps take your mind off the small but still noticeable performance penalty (the 0-62mph times of 5.3sec for the manual, 5.1 for the DCT, are both down half a second on what the equivalent coupes can achieve) and the bodyshell that, although 30 per cent stiffer than the last M3 convertible’s, still sends reminders shimmying back through the structure.

Depending on your point of view, exposure to the wind either dilutes the M3 experience or, given that the M3 ain’t what it used to be, enhances it. Until BMW gets back into the hardcore, lightweight business, it’s hard to call it either way.