Tiny changes make this the best E90 BMW M3 yet 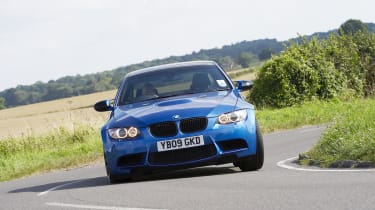 You might wonder why we’re giving the M3 Edition page space. After all, a drop in ride height of 10mm isn’t earth-shattering stuff and whilst the option to have black wheels, black wing mirrors and black tail pipes is very nice, it would have been nicer still to be able to team them with Jet Black paint rather than Alpine White, Dakar Yellow or Monte Carlo Blue.

Open the door and you’ll be greeted by a chequered flag motif on the sill plate while, inside, the ‘carbon structure’ leather trim has stitching and stripes in exterior-matching yellow, blue or white. the Edition costs £2500 more than a standard car and on the face of it seems rather like something that Mazda might have served up for one of its multitudinous limited ed MX-5s. Yet this is the best E90 series M3 I have driven.

The reason for this is twofold. First there is the drop in ride height. Second there is the rubber that our test car was wearing. The M3 normally comes shod with Michelin Pilot Sport Cups, tyres which can also be found on Porsche GT3s and 2s. They have almost slick outer edges and generate a huge amount of grip but, aside from producing scintillating lap times, I’m not convinced they show the M3 off to best advantage. Fitted to our Edition were the other OE tyres for the M3, the Continental Sport Contact 3s, and whilst they have slightly less overall grip they give a much more involving drive.

On the Michelins you had to be way up in the high-rev powerband to unstick the rear which, like drinking a crate of Red Bull, was fizzingly exciting but also a bit extreme. Now, with the help of the Continentals and the drop in ride height, the M3’s poise and adjustability shine through without the need to have the V8 revving sky-high. There’s the potential for a touch of understeer if you push the nose into a corner hard (not something you ever found with the Michelins) but it’s easily neutralised by getting back on the throttle and steering with the now instantly alert rear. It reminds me of the CLK Black Series, which has to be a very good thing.

Our test car also had the M double-clutch gearbox, which feels as good as it should away from the lardy convertible. All in all it is a fantastic car and a nice reminder in these times of silly SUVs of what M division really does best.