We drive the new BMW M4 convertible, to find out how the extra weight and softer suspension have affected the high performance model 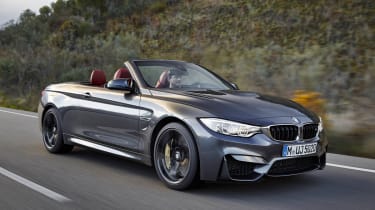 The drop-top version of BMW’s impressive new M4. Traditionally, M3 Convertibles (as they used to be known) have been the weak link in the chain – with more weight and less structural rigidity they lose a lot of what makes the saloon and coupe models so brilliant. Does this latest version manage to reverse that trend, or will keen drivers still want to steer clear?

In order to reclaim as much of the lost torsional rigidity as possible, BMW’s M engineers have thrown in around 200kg of additional body strengthening. Combined with the use of steel for the roof panel itself, rather than the carbon fibre that’s used on the saloon and coupe models, the 1825kg M4 Convertible is some 250kg heavier than its stablemates. It is, however, 60kg lighter than the previous V8 model, which is commendable in itself.

The engineers have also had to trim back the suspension settings a little to accommodate the body flex, which means the M4 Convertible is both softer and heavier than the fixed-roof models.

A six-speed manual gearbox is standard, although most buyers will fork out for the optional twin-clutch DCT. The engine is unchanged; 425bhp and 406lb ft (available from just 1850rpm) from a six-cylinder, twin-turbo 3-litre. That monstrous power is sent rearwards, through an M locking differential.

The M4 Convertible is suspended by MacPherson struts up front with a multi-link arrangement at the rear. The dampers are switchable between three modes, as is the drivetrain and steering.

In normal driving there’s very little to hint at the loss of rigidity and extra weight. The car rides well in the Comfort suspension setting and the metal roof gives it all the long-distance refinement of the saloon and coupe models. With the roof down and the wind deflector in place, meanwhile, the cabin is relatively calm and still even at speeds over 60mph. In practical terms, then, the Convertible requires no compromise.

What first gives away that extra weight is a slight blunting of straight line performance. Of course, the M4 Convertible remains a rapid car, but it does lose some of the fearsome, shocking thrust of the saloon and coupe. Over rougher, uneven stretches of the road, the driver will then become aware of the windscreen surround, steering column and rear view mirror shaking around. In reality, the M4 Convertible was never going to entirely conceal its extra mass and reduced rigidity.

However, it’s only in really spirited driving that the M4 Convertible feels much less agile and precise. As the driver really starts to push the boundaries of grip the car does begin to feel heavier and lazier, but at seven or eight tenths it’s as much fun as the saloon and coupe with the same easily-controlled mobility at the back axle under power. The electrically-assisted steering is direct and precise, although in Sport Plus it becomes unnecessarily heavy and sticky, and it doesn’t have the same intuitive feel of the previous M3.

The DCT gearbox works brilliantly in auto and manual modes and it suits the car’s character perfectly, while the engine feels responsive and particularly keen to rev out for a turbocharged engine. Its is, however, lacking in character and excitement for a car with an M badge on its rump.

The M4 Convertible doesn’t have any direct rivals; the £82,072 Porsche 911 Carrera 2 Cabriolet is probably the closest match. The Porsche lacks the straight line punch of the BMW and its rear seats are far less useable, although it isn’t as compromised in outright dynamic terms compared to its coupe sibling as the M4 Convertible is.

Perhaps more troublesome for the M4 Convertible is the in-house comparison to the 435i Convertible. That model, £15,265 cheaper than the M4, still returns plenty of straight line pace, roof-down style and desirability, but for much less outlay. Given that most M4 Convertible buyers will rarely explore their car’s dynamic limits, they might be better served by the cheaper, non-M model.

As with most Convertible cars these days, the M4’s roof can be lowered on the move. However, whereas certain cars can travel at speeds up to 30mph and still operate their roof mechanisms, the M4 will only do so under 11mph – it’s only when the traffic lights change and the roof is just halfway through its 20 second folding process that you realise just how slow 11mph actually is.