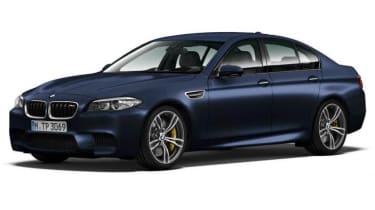 The facelifted F10 BMW M5 has leaked onto the internet. Shots of the car were uploaded onto BMW’s online configurator a little early, and thanks to a typically subtle mid-life update, there’s little ambiguity about what they illustrate.

The latest-generation M5 launched at the end of 2011, so isn’t exactly long in the tooth, but with the F10 5-series range three years old in 2013, it’s time for a minor freshen up.

The M5’s subtle changes include different a grille, which now contains an M5 badge, and a more attractive, slimmer rimmed steering wheel, seen already in the mk2 BMW M6.

The M5’s twin-turbo 4.4-litre V8 engine – boasting 552bhp and 501lb ft – is likely to remain intact, though a more aggressive Competition Package option is rumoured, which will boost the engine output and firm up the suspension in a bid to fight the new 577bhp Mercedes E63 AMG S Model. The new Audi RS7 and Jaguar XFR-S also join the super saloon race in 2013.