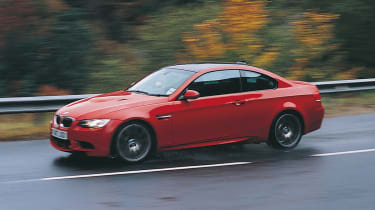 It was a dark and stormy night when we finally bonded, the M3 and me. The roads were slick with rain and when I arrived home after my half-hour drive, I had a much greater respect for the 400-plus bhp BMW.

Thus far, it had failed to hit the highs of my old Audi RS4 long-termer, and the shortfall was all in the detail. Many cars today have variable-weight steering, but with the best-judged systems you’d never know. In the M3, I kept noticing the steering’s lightness peeling into roundabouts. Not that night. All I noticed was that the front end was fantastically well hooked up, so then my attention focused on what was happening at the other end.

I’m only truly comfortable with a car once I know how it behaves when the grip runs out. You push to the limit, find out what it does, and then when you’re on the right road and travelling at speed, there are no nasty surprises. The opportunities to gather this sort of information on dry public roads are rare, especially with a car like the M3, which has stupendous rear grip and a high-revving engine that only truly delivers at the top end. You have to be pushing very hard. However, when the road glistens in the headlamps, the limits are much lower.

A couple of firm, exploratory prods of the throttle mid-corner in second gear showed the stability control was active. So when I arrived at the next empty roundabout, it was disengaged. Thing is, in the M3 you’re not on your own – the active M-diff is still working with you. Squeeze the throttle mid-corner and you can actually feel it adjust the torque distribution between the rear wheels to give most to the wheel that has most bite, and you exit with a sense of remarkable traction for a rear-driver. But give the throttle a more provacative shove and both rear tyres spin up, and that’s when you discover the superb poise and balance of the M3. First time I felt it, I was heading up a slip-road ramp in third gear, with a quarter turn of opposite lock, and the reach of the engine kept it going for a satisfying yardage. After that, every deserted roundabout and inviting corner was fair game and I arrived home with a grin and a new respect for the M3. Brilliant though it is, an RS4 can’t give you those thrills.

A week later the M3 was heading for Dover and Car of the Year, and I had a feeling that it might do rather better than I’d originally anticipated – especially if it rained.