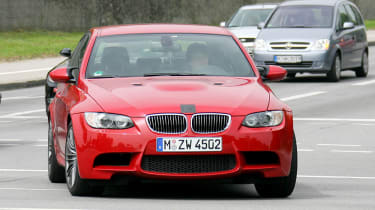 With minimal disguise, now it’s clear: the midlife facelift prepared for the BMW 3-Series saloon and estate will be given to the M3 as well – even to the four-door variant snapped here which hasn’t been officially presented at all. The front fascia will be slightly re-designed with a new bumper, modified fog lights and a differently sculpted bonnet. And there will be new tail lamps, too, plus we expect an updated cabin and emission-optimzed engines. The car will be officially unveiled at the Paris Show in October.